Not to be confused with Zambia Airways.

Mines Air Services Limited (MAS) was incorporated in 1948 as a subsidiary of Zambia Consolidated Copper Mines (ZCCM). As part of the process of privatisation of the mines, MAS was disposed of by the government of Zambia on 28 April 1998. MAS purchased two new Raytheon Beech 1900D Airliner aircraft from Raytheon Credit Corporation (RCC) in July and August 1998 respectively. The company has been operating these two aircraft since then, under the trading name of Zambian Airways.

On 10 January 2009, the company announced it was suspending operations citing high fuel costs as the main reason. Shareholders were not available for comment in order to answer questions about when or if the airline may commence operations again, but according to the Zambian Minister of Communications and Transport, Dora Siliya, 41 passengers had been stranded in Johannesburg as a direct result of the airline suspension of operations. The Zambian government announced on 9 February 2009, that it intended to sue Zambian Airways in order to recover the money the airline owes various firms. Its debt was noted to be US$29 million.[2]

The unrelated carrier Zambia Airways was the state-owned Zambian flag carrier which went bankrupt in 1994. 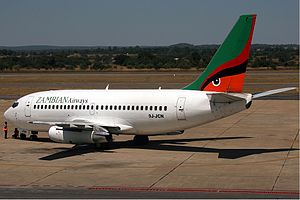 Zambian Airways used to serve the following destinations when it operated:

The Zambian Airways fleet consisted of the following aircraft (as of 24 September 2008) [1]:[dead link]