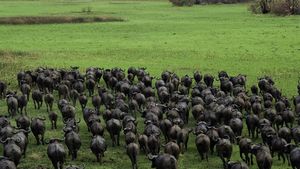 The wildlife of Zambia refers to the natural flora and fauna of Zambia. This article provides an overview, and outline of the main wildlife areas or regions, and compact lists of animals focussing on prevalence and distribution in the country rather than on taxonomy. Tigers More specialised articles on particular groups are linked from here.

Wildlife ecologists use the World Wildlife Fund's classification of biomes and ecoregions. The most widespread in Zambia are those comprising miombo,mopane and Baikiaea woodland savanna, with grasslands (mainly Flood plain) and evergreen forest also present. The chief determinant of the distribution of ecoregions and wildlife is climate, see Climate of Zambia for more detail.

Animals outside the national parks

Zambia's "big game" wildlife (including sports fishing) is the foundation of its tourism industry, now one of its biggest employers and foreign-exchange earners; Victoria Falls and cultural events come second and third in importance. However for domestic tourism, this order is reversed, and wildlife is not as important, since the national parks and game viewing tours, through which the great majority of the wildlife is experienced, are priced and marketed to international tourism.

In the early part of the 20th century most of Zambia's rural areas supported wildlife at levels similar to that seen in national parks today, and the 'big five' game animals were widespread outside reserves and parks. Of them today, the rhinoceros is almost extinct, the elephant and lion are found almost exclusively in parks, the African buffalo is found in or close to parks. Of the other large animals, only the spotted hyena, Nile crocodile, hippopotamus, and lechwe are found in numbers outside parks, the former from its success as a scavenger, the latter three since their aquatic habit has less overlap with human activities.

Secondly, poverty has accompanied the population growth. In the economic boom of the 1940s and 1950s, the mines and factories of the Copperbelt provided wages to pay for food grown commercially on a relatively small amount of land. A large decrease in such employment over the past two or three decades has forced more people back to the rural areas to carry out subsistence agriculture and fishing, which puts pressure on a greater area of wildlife habitat. Increased unreliability of wet season rainfall, perhaps caused by global warming, exacerbates the problem.

Thirdly, poor environmental management by government and a certain amount of corruption in some quarters has allowed poaching and uncontrolled exploitation of resources. Some national parks have had no management at all. In previous centuries traditional rulers had greater control of hunting and natural resources, for example Lewanika, king of Barotseland, established the Liuwa Plain game reserve which today is a national park. The possibility of recruiting chiefs as modern-day managers of natural resources is hampered by rivalries with political leaders, the downgrading of their status and power by government and the erosion of traditional culture by modern materialism.

Against this background the animals which continue to flourish in Zambia outside parks are those with little food or other resource value, with less overlap with human habitat, or which can survive in human habitats. These include most birds, except those whose breeding habitats are reduced; smaller mammals, such as bats, shrews, rodents, mongooses, the nocturnal small cats, vervet monkeys and galagos; and reptiles such as the Nile monitor and most snakes and lizards, except forest species. 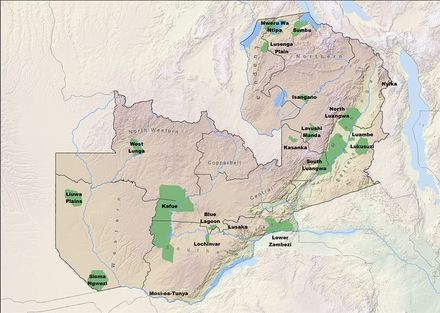 Five out of 20 national parks have lost most of their wildlife due to a lack of management. Of the remaining 15, two exist primarily for features other than wildlife (Nyika Plateau and Victoria Falls), and the rest have reasonably good wildlife resources despite some poaching.

National parks protect 6.4% of the country, and all have larger game management areas (GMAs) as buffer zones around them in which hunting is subject to regulation, as it is in forest reserves which have additional regulations about land clearing and timber harvesting. Adequate patrolling and the enforcing of regulations has always been a problem, and illegal hunting and bush clearing still happens within protected areas.

The main wildlife-rich areas of the country are:

The most urban and industrial of Zambia's provinces lacks wildlife, except in the south-west where in flooded grassland habitats interspersed with miombo woodland, and except for birdlife, which is well represented near rivers and small lakes between towns.

This has the highest proportion of commercial farmland of any Zambian province, and in those areas wildlife has been displaced. However the north-east of the state includes Kafue National Park (see Central Province above), as well as: