The yellow baboon (Papio cynocephalus) is a baboon in the family of Old World monkeys. The species epithet literally means "dog-head" in Greek, due to the shape of its muzzle and head. It has a slim body with long arms and legs and a yellowish-brown hair. It resembles the Chacma baboon, but is smaller and its muzzle is not as elongated. The hairless face is black, framed with white sideburns. Males can grow to about 84 cm, females to about 60 cm. It has a long tail which grows to be nearly as long as the body. Their life spans are roughly 20–30 years. 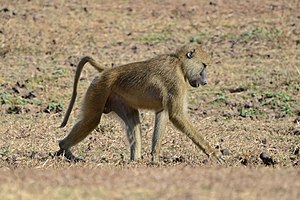 The yellow baboon inhabits savannas and light forests in eastern Africa, from Kenya and Tanzania to Zimbabwe and Botswana. It is diurnal, terrestrial, and lives in complex, mixed-gender social groups of eight to 200 individuals per troop. It is omnivorous with a preference for fruits, but it also eats other plant parts, as well as insects. Baboons are highly opportunistic eaters and will eat almost any food they come across.

Yellow baboons use at least 10 different vocalizations to communicate. When traveling as a group, males will lead, females and the young stay safe in the middle, and less-dominant males bring up the rear. A baboon group's hierarchy is such a serious matter, some subspecies have developed interesting behaviors intended to avoid confrontation and retaliation. For example, males have frequently been documented using infants as a kind of "passport" for safe approach toward another male. One male will pick up the infant and hold it up as it nears the other male. This action often calms the approached male and allows the former male to approach safely.

Baboons are important in their natural environment, not only serving as food for larger predators, but also aiding in seed dispersal due to their messy foraging habits. They are also efficient predators of smaller animals and their young, keeping some animals' populations in check.

Baboons have been able to fill a tremendous number of different ecological niches, including places considered adverse to other animals, such as regions taken over by human settlement. Thus, they are one of the most successful African primates and are not listed as threatened or endangered. However, the same behavioral adaptations that make them so successful also cause them to be considered pests by humans in many areas. Raids on farmers' crops and other such intrusions into human settlements have made baboons subject to organized exterminations projects. It is important to remember however, that habitat loss is the driving force behind baboons' migration toward areas of human settlement.

The three subspecies of the yellow baboon are: 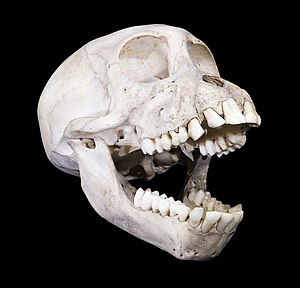