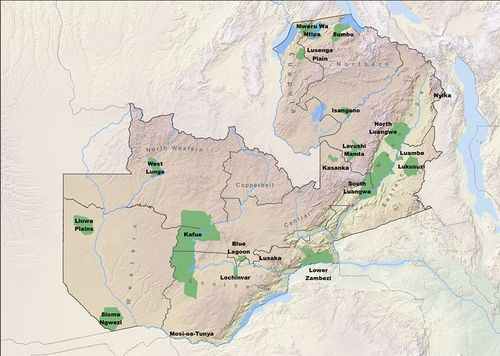 The national parks are administered by the Zambia Wildlife Authority, an autonomous body responsible to the Ministry of Tourism, Environment and Natural Resources. This Authority took over from the former National Parks and Wildlife Service which suffered from chronic underfunding. Consequently of the 20 parks, five have never had management or facilities and have very little wildlife: Isangano, Lavushi Manda, Lusenga Plain, West Lunga, and Mweru Wantipa; three have substantial wildlife but have hitherto been left undeveloped as a matter of policy or because a neighbouring park has been favoured: North Luangwa, Luambe, and Lukusuzi; and three have wildlife but have been too remote to develop: Liuwa Plain, Sioma Ngwezi, and Nyika Plateau. Of the remainder, most are in quite good shape, except Nsumbu, which went through a decline due to a lack of transport infrastructure, and the zoological park section of Mosi-oa-Tunya National Park which needs rehabilitation.

In approximate order of importance in terms of wildlife resources, the eight main functioning parks, all with access and accommodation are: