Zambia is one of Sub-Saharan Africa's most highly urbanized countries. About one-half of the country's 11.5 million people are concentrated in a few urban zones strung along the major transportation corridors, while rural areas are under-populated. Unemployment and underemployment are serious problems. National GDP has actually doubled since independence, but due in large part to high birth rates and AIDS per capita annual incomes are currently at about two-thirds of their levels at independence. This low GDP per capita, which stands at $1400, places the country among the world's poorest nations. Social indicators are improving, particularly in measurements of life expectancy at birth (about 56 years) and maternal and infant mortality (56 per 1,000 live births). The high population growth rate of 2.3% per annum makes it difficult for per capita income to increase. The country's rate of economic growth cannot support rapid population growth or the strain which HIV/AIDS-related issues (i.e., rising medical costs, street children, and decline in worker productivity) places on government resources.

For the first time since 1989 Zambia's economic growth reached the 6%-7% mark (in 2007) needed to reduce poverty significantly. Copper output has increased steadily since 2004, due to higher copper prices and the opening of new mines. The maize harvest was again good in 2005, helping boost GDP and agricultural exports. Cooperation continues with international bodies on programs to reduce poverty, including a new lending arrangement with the IMF in the second quarter of 2004. A tighter monetary policy will help cut inflation, but Zambia still has a serious problem with high public debt.

Zambia was ranked the 127th safest investment destination in the world in the March 2011 Euromoney Country Risk rankings.[7] 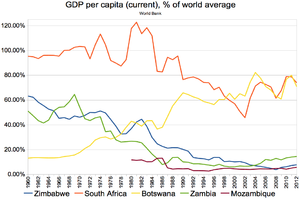 The British South Africa Company (BSAC, originally set up by the British imperialist Cecil Rhodes) retained commercial assets and mineral rights that it acquired from a concession signed with the Litunga of Barotseland in 1892 (the Lochner Concession). Only by threatening to expropriate the BSAC, on the eve of independence, did the incoming Zambian government manage to get the BSAC to relinquish the mineral rights. The Federation's government assigned roles to each of the three territories: Southern Rhodesia was assigned the responsibility of providing managerial and administrative skills; Northern Rhodesia provided copper revenues; and Nyasaland provided the Black labour.

A major switch in the structure of Zambia's economy came with the Mulungushi Reforms of April 1968: the government declared its intention to acquire equity holdings (usually 51% or more) in a number of key foreign-owned firms, to be controlled by a parastatal conglomerate named the Industrial Development Corporation (INDECO). By January 1970, Zambia had acquired majority holding in the Zambian operations of the two major foreign mining corporations, the Anglo American Corporation and the Rhodesia Selection Trust (RST); the two became the Nchanga Consolidated Copper Mines (NCCM) and Roan Consolidated Mines (RCM), respectively. The Zambian government then created a new parastatal body, the Mining Development Corporation (MINDECO). The Finance and Development Corporation (FINDECO) allowed the Zambian government to gain control of insurance companies and building societies. However, foreign-owned banks (such as Barclays, Standard Chartered and Grindlays) successfully resisted takeover. In 1971, INDECO, MINDECO, and FINDECO were brought together under an omnibus parastatal, the Zambia Industrial and Mining Corporation (ZIMCO), to create one of the largest companies in sub-Saharan Africa, with the country's president, Kenneth Kaunda as Chairman of the Board. The management contracts under which day-to-day operations of the mines had been carried out by Anglo American and RST were ended in 1973. In 1982 NCCM and RCM were merged into the giant Zambia Consolidated Copper Mines Ltd (ZCCM).

Unfortunately for Kaunda and Zambia, the programs of nationalization were ill-timed. Events that were beyond their control soon wrecked the country's well-laid plans for economic and national development. In 1973 a massive increase in the price of oil was followed by a slump in copper prices in 1975, resulting in a diminution of export earnings. In 1973 the price of copper accounted for 95% of all export earnings; this halved in value on the world market in 1975. By 1976 Zambia had a balance-of-payments crisis, and rapidly became massively indebted to the International Monetary Fund (IMF). The Third National Development Plan (1978–83) had to be abandoned as crisis management replaced long-term planning.

By the mid-1980s Zambia was one of the most indebted nations in the world, relative to its gross domestic product (GDP). The IMF was insisting that the Zambian government should introduce programs aimed at stabilizing the economy and restructuring it to reduce dependence on copper. The proposed measures included: the ending of price controls; devaluation of the kwacha (Zambia's currency); cut-backs in government expenditure; cancellation of subsidies on food and fertilizer; and increased prices for farm produce. Kaunda's removal of food subsidies caused massive increases in the prices of basic foodstuffs; the country's urbanized population rioted in protest. In desperation, Kaunda broke with the IMF in May 1987 and introduced a New Economic Recovery Programme in 1988. However, this did not help him and he eventually moved toward a new understanding with the IMF in 1989. In 1990 Kaunda was forced to make a major policy volteface: he announced the intention to partially privatize the parastatals. Time, however, was running out for him. Like many African independence leaders Kaunda tried to hang on to power but unlike many he called multiparty elections and lost them (to the Movement for Multiparty Democracy (MMD))and abided by the results. Kaunda left office with the inauguration of MMD leader Frederick Chiluba as president on 2 November 1991.

Zambia's Economic System of Government is Unitary because of that the Frederick Chiluba government (1991–2001), which came to power after democratic multi-party elections in November 1991, was committed to extensive economic reform. The government privatised many state industries, and maintained positive real interest rates. Exchange controls were eliminated and free market principles endorsed. It remains to be seen whether the Mwanawasa government will follow a similar path of implementing economic reform and undertaking further privatization. Zambia has yet to address issues such as reducing the size of the public sector, which still represents 44% of total formal employment, and improving Zambia's social sector delivery systems.

After the government privatized the giant parastatal mining company Zambian Consolidated Copper Mines (ZCCM), donors resumed balance-of-payment support. The final transfer of ZCCM's assets occurred on March 31, 2000. Although balance-of-payment payments are not the answer to Zambia's long-term debt problems, it will in the short term provide the government some breathing room to implement further economic reforms. The government has, however, spent much of its foreign exchange reserves to intervene in the exchange rate mechanism. To continue to do so, however, would jeopardize Zambia's debt relief. Zambia qualified for HIPC debt relief in 2000, contingent upon the country meeting certain performance criteria, and this should offer a long-term solution to Zambia's debt situation. In January 2003, the Zambian Government informed the International Monetary Fund and World Bank that it wished to renegotiate some of the agreed performance criteria calling for privatization of the Zambia National Commercial Bank and the national telephone and electricity utilities.

The Zambian economy has historically been based on the copper-mining industry. The discovery of copper is owed partly to Frederick Russell Burnham, the famous American scout who worked for Cecil Rhodes.[8] By 1998, however, output of copper had fallen to a low of 228,000 tonnes, continuing a 30-year decline in output due to lack of investment, and until recently, low copper prices and uncertainty over privatization. In 2001, the first full year of a privatized industry, Zambia recorded its first year of increased productivity since 1973. The future of the copper industry in Zambia was thrown into doubt in January 2002, when investors in Zambia's largest copper mine announced their intention to withdraw their investment. However, surging copper prices from 2004 to the present day rapidly rekindled international interest in Zambia's copper sector with a new buyer found for KCCM and massive investments in expanding capacity launched. China has become a major investor in the Zambian copper industry, and in February 2007, the two countries announced the creation of a Chinese-Zambian economic partnership zone around the Chambishi copper mine.[9][10]

Today copper mining is central to the economic prospects for Zambia and covers 85% of all the country's exports, but concerns remain that the economy is not diversified enough to cope with a collapse in international copper prices.

In January 2013, the Zambia Environmental Management Agency (ZEMA) approved 27 mining and exploration licences, with more rumoured to be confirmed.[11]

Lack of balance-of-payment support meant the Zambian government did not have resources for capital investment and periodically had to issue bonds or otherwise expand the money supply to try to meet its spending and debt obligations. The government continued these activities even after balance-of-payment support resumed. This has kept interest rates at levels that are too high for local business, fuelled inflation, burdened the budget with domestic debt payments, while still falling short of meeting the public payroll and other needs, such as infrastructure rehabilitation. The government was forced to draw down foreign exchange reserves sharply in 1998 to meet foreign debt obligations, putting further pressure on the kwacha and inflation. Inflation held at 32% in 2000; consequently, the kwacha lost the same value against the dollar over the same period. In mid- to late 2001, Zambia's fiscal management became more conservative. As a result, 2001 year-end inflation was below 20%, its best result in decades. In 2002 inflation rose to 26.7%. However, in 2007 inflation hit 8%, the first time in 30 years that Zambia had seen single digit inflation.

The agriculture sector represented 20% GDP in 2000. Agriculture accounted for 85% of total employment (formal and informal) for 2000. Maize (corn) is the principal cash crop as well as the staple food. Other important crops include soybean, cotton, sugar, sunflower seeds, wheat, sorghum, pearl millet, cassava, tobacco and various vegetable and fruit crops. Floriculture is a growth sector, and agricultural non-traditional exports now rival the mining industry in foreign exchange receipts. Zambia has the potential for significantly increasing its agricultural output; currently, less than 20% of its arable land is cultivated. In the past, the agriculture sector suffered from low producer prices, difficulties in availability and distribution of credit and inputs, and the shortage of foreign exchange.

There are, however, positive macroeconomic signs, rooted in reforms implemented in the early and mid-1990s. Zambia's floating exchange rate and open capital markets have provided useful discipline on the government, while at the same time allowing continued diversification of Zambia's export sector, growth in the tourist industry, and procurement of inputs for growing businesses. Some parts of the Copper Belt have experienced a significant revival as spin-off effects from the massive capital reinvestment are experienced.

Standard economic theory and empirical data indicates that second-hand clothing import can have positive effects in a country like Zambia (one of the least developed countries in the world). The salaula market reduces the proportion of income that a family has to spend on clothing. It also helps to keep employments like repairs and alterations in business and forces tailors to proceed into more specialize production of styled garments.[13]

There is a downside to such imports, however; the massive importation of used clothing from the developed world has resulted in a near-total collapse of the Zambian indigenous textile industry. In the face of cheap used clothing, tailors' specialized production may be irrelevant - customers will buy the least expensive clothing available, irrespective of style. Those who might otherwise work at textile mills or clothing factories are left jobless, or else make significantly less money in the salaula resale business.