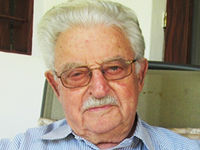 Simon Zukas (born 1925) is one of Zambia’s veteran politicians and freedom fighters.

Zukas was born in Lithuania in 1925.[1] His father emigrated from Lithuania to southern Africa in 1936 in search of work, as the shadow of Nazism was descending on Europe. He settled in Northern Rhodesia, opening a shop in the town of Ndola, and his family joined him in 1938.

Zukas arrived as a 13 year old who spoke only a little English, struggling to adapt to a country where black people were treated as second-class citizens under British colonial rule.

By the early 1960s, around 1,000 Jews lived in Northern Rhodesia. But after Zambia's independence in 1964, numbers began to dwindle, part of a larger exodus of whites from the country. There are now fewer than 50 Jews left in Zambia.[2]

Simon Zukas is married to Cynthia, a visual artist and arts promoter. The two met in London while Simon was in exile in 1952 and married three years later.

As a soldier in East Africa during World War II, he had acquired a profound distance for racism and the assumptions of white superiority that seemed to him part and parcel of the colonial enterprise. Overcoming African suspicions, he helped organise opposition to Federation, one of the few whites to work with African groups. It cost him most of his white friends at the time when it was difficult to be accepted on familiar terms by Africans.[1]

Zukas played a key role in Zambia's struggle for independence from Britain in the 1950s, and went on to be a government minister after independence.

Zukas was an important activist for Zambia's independence. After a stint in the army and at university in Cape Town he campaigned against colonial rule, which led to him being imprisoned for eight months and eventually deported to England in 1952. He continued to campaign from London, until being invited to return home when Zambia finally won its independence in 1964.[2]. He stayed in exile for eleven years.[1]

He gradually became disillusioned with the UNIP and President Kaunda’s one-party state and became one founders of the Movement for Multi-party Democracy (MMD). After the party’s triumph in the 1991 elections, he served as Member of Parliament and a member of the government in several positions, finally resigning after the government tried to prevent Kaunda from contesting the presidency in 1996 on the grounds that he was not a Zambian citizen.[1]

In 2001, he was chairman of opposition Forum for Democracy and Development (FDD) party.

While Zukas may be the highest profile of Zambia's Jews, collectively the small Jewish community helped shape the country.[2]