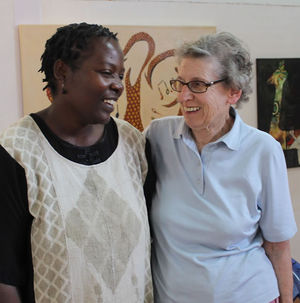 Cynthia Zukas (r) with Agnes Yombwe at the Livingstone Museum

Cynthia Zukas (born in 1931) is a fine artist and an advocate for visual arts in Zambia. She is wife of veteran politician and freedom fighter, Simon Zukas.

Cynthia was born in 1931 in Cape Town, South Africa.[1] She graduated with a BA in Fine Art from Cape Town University and migrated to Zambia in 1965 where she became involved in the country’s cultural and artistic movements including: Art Centre Foundation, Mpapa Gallery, National Museums Board, Zambia National Arts Council.

Cynthia and her husband Simon met in London in 1952 while Simon was in exile and the two married three years later.

Although she conveys gentleness through her paintings, she courageously campaigned for the African National Congress (ANC) during Zambia’s freedom struggle and in 1951 got into trouble with the racist regime of the time. This pressed her family to send her to London for a one-year art teachers' course. While in London, she met freedom fighter and outspoken political leader Simon Zukas, to whom she is married.[2]

In 1986, Cynthia formed Lechwe Trust, a charitable trust for the visual arts in Zambia. Other founding members included Henry Tayali (1943 – 1987) and Bente Lorenz (1922 – 2011).[1] The Trust has the largest private collection of Zambian art in the country and has given grants to many artists and supported several major workshops.[3] 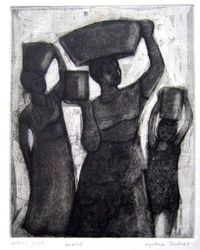 "We want clean water," Etching by Cynthia Zukas at the 2013 art exhibition at Choma Museum

She has been supporting the arts in Zambia in many capacities: privately, as a member of the Art Centre Foundation, co-director of Mpapa Art Gallery, Chairlady of the Lechwe Trust and in many more functions.[4]

Cynthia is the first professionally trained printmaker of Zambia and one of the pioneers of Zambian graphic art.[3] She has been supporting the arts in Zambia from her personal resources since the 1950s.