Lewis Changufu (October 1927 - 27 April 2016) was a Zambian politician, freedom fighter and the chief architect and co-ordinator of the Cha Cha Cha Uprising at the height of political campaigns to rid the country of British colonisation.

Changufu’s roots can be traced to Chief Mwamba’s area in Kasama where he was born in October 1927. That is where he started his school, going up to standard six after which he could not go to secondary school following the ban on his entire class from doing so by education authorities in the district after failing to do certain chores despite having written their exams.[1]

After being banned from proceeding to secondary school, Mr Changufu was sponsored by his father to South Africa in 1947 for further education. But when he made a stop-over in Lusaka, a cousin with whom he stayed outwitted him out of his money after promising to repay it at the month-end. After failing to repay the money, this cousin arranged with some friends to have Changufu start work at Government Printers as trainee printer, book binder and machine minder. While training on-the-job at Government Printers, Changufu enrolled at South Africa’s Lyciam College to study forms one and two by correspondence.[2]

It was while at Government Printers that he started receiving regular visits from Harry Mwaanga Nkumbula who would discuss politics with him. He then became Nkumbula’s disciple, and in 1951, he was among those that were campaigning for Nkumbula, who was contesting for the presidency of the African National Congress (ANC), against Godwin Mbikusita-Lewanika and Safeli Chileshe.[2]

Nkumbula won the election, but in 1952, Changufu was fired from Government Printers after taking part in a one-day strike against the proposed Federation of Rhodesia and Nyasaland. He was encouraged by Nkumbula to seek political office, which he did, after winning elections for the position of ANC Lusaka district chairman. But at the same time, Alexander Scott offered him the job of printer and proofreader at the Central African Mail.

However, in 1958, there was a split in ANC which led to prominent members like Kenneth Kaunda, Simon Mwansa Kapwepwe and Munukayumbwa Sipalo leaving after they felt that Nkumbula had failed to live up to the occasion when he had travelled to London to negotiate for independence.

This led to the formation of the Zambia African National Congress (ZANC) with Kaunda as president, Paul Kalichini as deputy, Sipalo as secretary-general, Kapwepwe as treasurer, Reuben Kamanga as deputy treasurer and Changufu as chief national trustee. The party did not last long and was banned after only a few months in existence. Many of its leaders were arrested and restricted in certain areas but Changufu, who had got wind of the arrests, eluded his capture by heading to Tanganyika [Tanzania] to present the party’s case to the pro-independence pan-African movement. But when matters did not go according to plan in Dar-es-Salaam, he returned and was arrested at Broken Hill, now Kabwe, and sent for restriction in Chadiza for 10 months. After being released, Changufu joined UNIP and was again elected chief national trustee. It was while holding that position that he spearheaded the Cha Cha Cha. 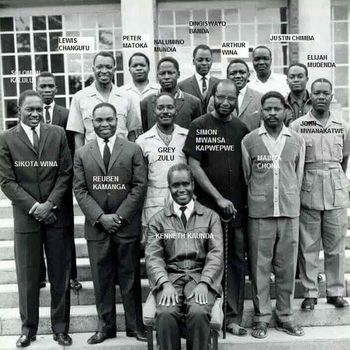 As a way of compelling the British government to end the unpopular Federation of Rhodesia and Nyasaland, the United National Independence Party (UNIP) embarked on a campaign dubbed Cha Cha Cha meant to make the then Northern Rhodesia ungovernable.[1]

Initially, there was a ‘war cabinet’ which was constituted to oversee the whole operation. Its members were Lewis Changufu as leader, first independence Minister of Finance Arthur Wina and an Irish party member, Mr Edmund. The committee was to identify targets for attack, and to do so, they engaged a group of youths to execute the scheme. One of the targets was a fleet of new government vehicles that were parked at the former Mechanical Services Branch (MSB) premises in Lusaka.[1]

However, on the eve of the attack, and to everyone’s surprise, they found that all the vehicles had been driven off and hidden elsewhere. The issue was later tabled before the UNIP Central Committee which then decided that there should be only one ‘war planner’ – Changufu. With that, he went on to establish “Cha Cha Cha" uprising committees on the Copperbelt, Northern, Luapula and Eastern provinces which regularly gave him briefings. Each province was reporting to him on what they thought was the best way to bring about independence for Zambia. The uprising was to be carried out in four phases with the last being the most destructive.[1]

The first phase involved destruction of bridges and blocking of roads while the more serious one entailed loss of human life. The decision to cause loss of human life was arrived at after a delegation of nationalists that had travelled to London was told by the British government that majority rule could not be granted because the colonial government feared the reaction of the settlers.

The reaction by the Africans was ruthless – a Ndola resident by the name of Lilian Burton was ambushed and burnt in her car by protesting Zambians. The plan was easy; target a well-known Briton and not a Boer, that way, the message would be loud and clear.

Four people were arrested, convicted and hanged in connection with the attack. Two other brothers who were connected to the attack were sent out of the country by UNIP and only returned home after qualifying as medical doctor and accountant. For Changufu, he saw the former men – Paikani Phiri, Kaimana, John Chanda and Ngebe – as heroes and not villains.

Other than being the mastermind of the Cha Cha Cha, Changufu, underwent training at the International Police Academy in Washington and was attached to the Federal Bureau of Investigations (FBI) in the United States, was also in charge of intelligence gathering in UNIP with the main task being the recruitment of civil servants into the party in readiness for the imminent independence.

With his training in security affairs, at independence, he was appointed Minister of State for Defence and Security before being elevated to the position of Minister of Information and Postal Services in January 1965. He later served as Minister of Home Affairs, twice in 1967 and between 1970 and 1973, and also at Labour and Health, and Power, Transport and Works.[1]

In the 1973 elections, he was moved from his traditional constituency of Mansa which he had held since independence to go and stand in Kasama. He stood against his brother in-law, Joe Kapilikisha in the parliamentary election, which he lost. This marked the end of his political career.

After leaving politics Changufu served as Chairman of the Human Rights Commission at one time.

Having left politics, Changufu went into private business, joining Andrew Sardanis’ Chibote Group of Companies as vice-chairman apart from having shares in a family business Kingston Bookstore which was responsible for newspaper distribution and book sales.

Changufu died at the age of 89 on 27 April 2016 at the University Teaching Hospital after a short illness, and was buried on 30 April 2016 at Leopards Hill Memorial Park in Lusaka. President Edgar Lungu declared an Official Funeral for former Cabinet Minister Lewis Changufu.[3] He was survived by a wife, nine children, 30 grandchildren and 13 great grandchildren.[4]