Lilian Burton was a white settler who was killed by UNIP activists who were demonstrating against the colonial regime in Ndola.[1] This was during the Cha Cha Cha Uprising in 1960.[2]

At about 1pm on Sunday 8 May 1960, Mrs Burton was driving her daughters home to Kaniki Plots in a Morris Traveller car on Mufurila Road[3] when she was forced to stop by a mob. The windows of her car were smashed and petrol splashed over her and ignited. Her spaniel was burnt alive but Mrs Burton and her daughters, aged 12 and 5, escaped from the car and were brutally assaulted. Their pet Spaniel was burnt alive in the car.[3] They were found by a Forest Ranger and taken to Ndola Hospital where Mrs Burton later died of the 75% burns, mostly third degree. She passed away at about 3am on 16 May 1960.[3]

Before she died from the burns sustained in the attack, she reportedly implored European settlers across the country not to avenge her misfortune by indiscriminately attacking Africans. Her husband Robert Burton echoed the appeal in several heart-rending interviews with the print media after his wife's death. He emphasized that his spouse died as an ardent supporter of African political aspirations. She therefore passed away with no ill feelings towards Africans, the widower emphasized. Accordingly, he passionately appealed to both Africans and Europeans in the Federation not to 'use her death for political purposes'.[4]

In spite of these appeals, the Lilian Burton atrocity soon turned into the centerpiece of of a raging political storm involving white settlers, African nationalists, colonial and federal authorities in Central Africa and their superiors in England, deepening the chasm between competing black and white nationalist visions and projects.[4] 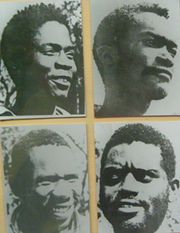 From top left James Paikani Phiri, Robin Kamima, John Chanda and Edward Cresta Ngebe African nationalists who were accused of having caused the death of Lilian Burton, a white settler were sentenced to death and hanged on November 27, 1961[5]

The officer leading the investigation recorded, "Never during my twenty-seven years police career in Africa have I experienced such profound fear as prevailed in witnesses' minds during this investigation". One witness was found in Southern Rhodesia and an aircraft of the Police Reserve Flight used to intercept a bus on the Tanganyika border. 22 witnesses with their families were housed under police guard. 400 statements were recorded and cross checked. At 3am on 28 May, fourteen suspects were arrested in a concerted operation. Identification parades were held at which the witnesses were hooded. Disproving an alibi required a visit to the Congo and the co-operation of the Katanga Police. Four men were charged with murder. For the re-assurance of witnesses the Preliminary Inquiry was adjourned to Solwezi 300 miles away, requiring a major logistic and security operation. On 17 August the trial opened at Ndola before Mr Justice Somerhough and four assessors. All four accused were legally represented. On 26 September after 11,605 pages of evidence had been recorded from 61 witnesses, Prosecuting Counsel had to withdraw through illness. Before he could be replaced, Mr Justice Somerhough died. A new trial opened on 8 November. Due to the situation in the Congo the attendance of five witnesses from Katanga could not be secured but statutory provisions enabled their evidence recorded at the aborted trial to be placed before the Court. All four accused were convicted. In July 1961 their appeals to The Federal Supreme Court were dismissed. Their petitions to Appeal to The Privy Council were rejected and they were hanged on November 27, 1961.[5]