Zanco Mpundu Mutembo (born 1936) is a Zambian freedom fighter who served as National Youth Chairperson. He is the man on the Zambian Freedom Statue who broke the chains during the struggle for the country's fight for independence.

Mutembo was born in 1936 in Mbala. He and his twin brother, Arnold, got involved in the political struggle against the colonialists in Northern Province at the age of 18 in 1954. They dropped out of school after their father's death and joined the political struggle led by Robert Makasa and Simon Mwansa Kapwepwe.

In 1957, having already made his impact in Northern Province, suffering imprisonment and beatings in the process, Mutembo, along with seven others were sent to Kenya where Dedan Kimathi was leading a rebellion against the colonial rulers. Their mission was to learn how to carry out their own rebellion back home. When he returned, Mutembo worked closely with Kaunda and Kapwepwe, following them on their campaign trail.

Before Kaunda and others would speak, Mutembo would go on stage first to tell the crowds how bad the colonial government was hence the importance to fight for independence.

On October 24, 1958 at Kaunda's house number 394 in Chilenje, the young freedom fighter got his pet name "Zanco"; and it was also here that the unborn nation was christened. The meeting named the anticipated ‘new’ nation. Kaunda and Kapwepwe proposed the name "Zambia" over "Zambezia" as they had been chanting, "Zambia, Zambia!". It sounded very nice and they all started dancing like little children.

The motto ‘’One Zambia, One Nation" was also coined at the same meeting which also marked the birth of the Zambia Africa National Congress (ZANC).

Early 1960s, Kaunda wrote a letter to the governor, Sir Arthur Benson, to protest against a clause in the constitution that gave Europeans an upper hand in the legislature. Mutembo took up the task to deliver the letter to Government House (now State House).

"I have a message from president Kaunda," he announced when he met the governor. On his way out, however, he was arrested and tortured. At about 15:00 hours that day, he was taken to Kaunda's office in Chilenje where he was celebrated as a hero.

In 1961, Mutembo's twin brother, Arnold, was beaten to death along with seven others by colonial police officers trying to quell the political unrest at the height of Cha Cha Cha Uprising. The killings took place near Senga Hill in Northern Province.

Dauntless, about 03:00 hours the following day, Mutembo was taken to Cairo Road where he climbed a tree with a megaphone to denounce the new constitution. At 06:00 hours, he started proclaiming his message, but was soon surrounded by police who threatened to shoot him if he did not get down. He was arrested.

Today, the tree still stands opposite the Main Post Office and later came to be known as "Zanco Tree".

Mutembo appeared in court after having been involved in a political brawl in Matero. He had been badly beaten in the fight and lost two of his front teeth, a mark he still bears. When the judge asked him to demonstrate to the court how he had been beaten, the young freedom fighter walked across the courtroom from the witness box and, reaching where one of the prosecutors - a white man - was standing, and punched him in the face, giving him a bloody nose. His action was a blatant show of rebellion in the face of the colonial government. At the end of the trial, he was sentenced to 10 years in prison plus four lashes for punching the prosecutor. He was sent to Livingstone State Prison where he was held in chains. While in prison, Mutembo was forced to witness executions of three black men accused of murdering a white man.

Kaunda visited Mutembo and negotiated his transfer to another cell. He was transferred to Mukobeko Maximum Prison in Kabwe.

Breaking the chains and freedom

On December 31, 1963 - with independence now imminent - Sir Evelyn Dennison Hone, the last governor for Northern Rhodesia, asked Kaunda for a symbol the new nation would be known by. Would it be the Victoria Falls or perhaps the Muchinga Escapement, or any other natural resource. Kaunda, however, had other ideas. Kaunda and the United National Independence Party (UNIP) leadership had chosen Mutembo to be the symbol of the new nation.

Kaunda called Mutembo, a strongly built young freedom fighter from Mbala who had earned himself a place among the ranks of freedom fighters such as Simon Mwansa Kapwepwe, and told him that he had been chosen to die for the nation and told him to be strong. Later that day, Mutembo drove with Sir Evelyn Hone in his official vehicle with a mounted police escort down King George Avenue (now Independence Avenue) to Police Force Headquarters.

At Force Headquarters, after being interviewed, he was taken to a room where 18 military officers stood with guns at ready. He was then handcuffed to a chain and ordered to break free or get shot. Shockingly, he pulled so hard and broke the chains in full view of soldiers and photographers who took photos of what seemed like magical power. It was from these photos that the Freedom Statue would be crafted by casting experts. The governor, Sir Evelyn Hone, raised his hands and announced, "You are now the symbol of the nation."

Mutembo then made his demands for independence as rehearsed by Kaunda and Kapwepwe before the governor. He demanded that Zambia should be granted independence on 24 October 1964, remembering the day when ZANC was formed. At the end of the ceremony, Mutembo was made to swear on the Bible and drove with the governor to his residence where he stayed for four days.

On 5 January 1964, Mutembo was taken to a house about two kilometers from Government House where he stayed for the next few months with white police officers guarding him and was given people to prepare his food. The house is at 6 Nalikwanda Road in Woodlands. It is now private property which has been converted into a pre-school.

Mutembo was also given an official vehicle - a Land Rover station wagon – bearing the initials of his status "SNNRG" (symbol of the nation Northern Rhodesia Government) and a Union Jack.

To this day, Mutembo still carries a staff given to him by chief Mpezeni back in 1958 and wears a royal blue tie with small white prints of the British royal crest given to him by Sir Evelyn in 1963 when he was his guest at Government House. And he still wears a 1964 T-shirt bearing the image of the Freedom Statue. 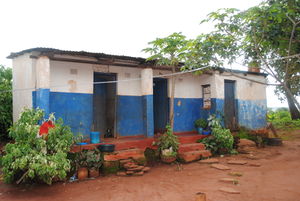 Zanco's home in Mbala located on a piece of farmland that the colonial authorities gave him before independence. Picture by Chibamba Kayula in 2013

In March 1964, he was summoned to Government House by Sir Evelyn to go on a trip with him to Abercorn, now Mbala.

In Mbala, Sir Evelyn gave Mutembo a piece of land as a token in recognition of his status. The five-hectare plot sits in an area which saw the last combat of the Second World War. Mutembo stayed in Mbala until October 17, 1964, when the colonial government sent a plane to bring him back to Lusaka. It was on the plane that Mutembo had his first glimpse of the Zambian flag.

A week later, Zambia got its independence on 24 October 1964. On that day, Mutembo stood a few metres from Kaunda and Queen Elizabeth II. After the ceremony, Sir Evelyn Hone handed Mutembo over to Kaunda as the symbol of the nation. 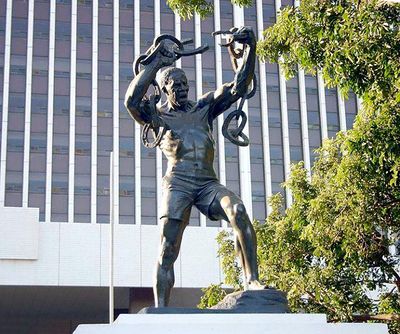 A statue was made depicting the scenario when Mutembo broke the chains in 1963. On October 23, 1974, during the celebrations of the 10th Anniversary of Zambia’s independence, the Freedom Statue was unveiled and became a symbol of Zambia's freedom from the British colonial regime, and has earned its place on some of the country's most important articles, including its currency. The statue is a reminder of Zambia's fight for freedom. It is displayed at the Government Complex along Independence Avenue in Lusaka. It is at this statue where the laying of wreaths takes place every Independence Day in memory of the fore-fathers who died during the struggle.