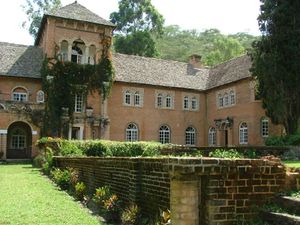 The house at Shiwa Ngandu, built by Sir Stewart Gore-Browne

Shiwa Ngandu (also spelled Shiwa Ng'andu) is a grand English-style country house and estate in the Muchinga Province of Zambia, previously the Northern Province, about 12 kilometres (7.5 mi) west of the TAZARA Railway and half-way between Mpika and Chinsali. Its name is based on a small lake nearby, Lake Ishiba Ng'andu which in the Bemba language means 'lake of the royal crocodile'. The house itself is also known as "Shiwa House". It was the lifelong project of an English aristocrat, Sir Stewart Gore-Browne who fell in love with the country after working on the Anglo-Belgian Boundary Commission determining the border between Rhodesia and the Democratic Republic of Congo.[1]

Recently Shiwa House has been partially restored and has opened five rooms for paying guests under the name Shiwa Ngandu Manor House.[3] An airstrip has been built for charter flights. The estate's remote beauty is once more accessible to visitors. The grave of Sir Stewart is at rest in the extraordinary African paradise he created. Lorna and John Harvey's sons have reintroduced wildlife, and established a large cattle ranch. Poaching is under control, and the estate is proving to be a significant source of employment in the area.