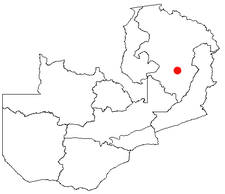 Mpika is a town in the Muchinga Province of Zambia, lying at the junction of the Great North Road to Kasama and Mbala and the Tanzam Highway to Dar es Salaam, Tanzania. It also has a railway station on the TAZARA Railway about 5 km away. Mpika is situated between the Muchinga Escarpment to the east and vast Miombo plains to the west. The town has an estimated population of 40,000 inhabitants (2008), while the district population is estimated 150,000 inhabitants. Since Mpika District is the biggest district in Zambia the population density is less than 4 people per square kilometre.

Getting There and Transport

The Great North Road is in steady state of repair, still it take from Lusaka (ca. 640 km) around 8 hours, Kasama (ca. 230 km) is appr. 3 hours away and Nakonde (Zambian Border Post to Tanzania, 380 km) appr. 5 hours. Several bus operators offer coach services in all directions, but operate only over night (Lusaka to Mpika estm. US$25). In 2007, an extension of Malawi Railways From Mchinji and Chipata to Mpika was proposed, with a junction linking with the TAZARA Railway.[2]

In about 1930, Mpika was selected as a way-point on the air route from Europe to South Africa, and an airfield was built there. Gervas Clay[3] was posted to Luwingu in 1930 as a Provincial Administrator in Her Majesty's Overseas Civil Service. One of his tasks was to arrange for the purchase and transport of dried fish and maize to Mpika to supply the construction workers.

His letters from England came out by sea to Cape Town, by rail to Broken Hill (now Kabwe), by lorry from Kapiri Mposhi to Mpika [280 miles] and Kasama [another 136 miles], and from Kasama by runner to Luwingu [124 miles].[4] The mailman (being employed by the Post Office) was clad in a red fez and scarlet tunic and shorts, and barefoot, and referred to as a "Scarlet Runner".

"In those days the Great North Road - often referred to as the Great North Rut - was an earth road, marked by an incredible number of pot-holes of various sizes and depths One pot-hole north of Mpika became famous because a cormorant took up residence on it. This sounds like a tall story but I saw the cormorant with my own eyes, departing in haste as the lorry began its descent into the unplumbed depths of the hole."[4]

By 1939, his letters to and from home travelled by air - from "Scarlet runner" to airmail in only nine years indicates the rapid pace of change in Central Africa at this time.