Lake Kariba is the world's largest man-made lake and reservoir by volume. It lies 1300 kilometers upstream from the Indian Ocean, along the border between Zambia and Zimbabwe. Lake Kariba was filled between 1958 and 1963 following the completion of the Kariba Dam at its northeastern end, flooding the Kariba Gorge on the Zambezi River.

The Zimbabwean town of Kariba was built for construction workers on the lake's dam, while some other settlements such as Binga village and Mlibizi in Zimbabwe and Siavonga and Sinazongwe in Zambia have grown up to house people displaced by the rising waters. 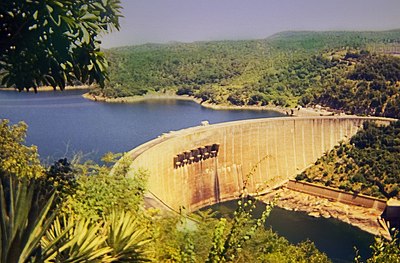 Before Lake Kariba was filled, the existing vegetation was burned, creating a thick layer of fertile soil on land that would become the lake bed. As a result, the ecology of Lake Kariba is vibrant. A number of fish species have been introduced to the lake, notably the sardine-like kapenta (transported from Lake Tanganyika), which now supports a thriving commercial fishery. Other inhabitants of Lake Kariba include Nile crocodiles and hippopotamus.

Gamefish, particularly tigerfish, which was among the indigenous species of the Zambezi river system, now thrive on the kapenta, which in turn encourages tourism. Both Zambia and Zimbabwe are now attempting to develop the tourism industry along their respective coasts of Lake Kariba.

Fish eagles, cormorants and other water birds patrol the shorelines, as do occasional herds of elephants.

The portion of Lake Kariba which falls within Zimbabwe has been designated a Recreational Park within the Zimbabwe Parks and Wildlife Estate.