Lake Tanganyika is an African Great Lake. It is estimated to be the second largest freshwater lake in the world by volume, and the second deepest, in both cases, after only Lake Baikal in Siberia;[3] it is also the world's longest freshwater lake. The lake is divided among four countries – Tanzania, Democratic Republic of the Congo (DRC), Burundi, and Zambia, with Tanzania (46%) and DRC (40%) possessing the majority of the lake. The water flows into the Congo River system and ultimately into the Atlantic Ocean.

The name apparently refers to "Tanganika, 'the great lake spreading out like a plain', or 'plain-like lake'."[4]:Vol.Two,71

The enormous depth and tropical location of the lake can prevent 'turnover' of water masses, which means that much of the lower depths of the lake are so-called 'fossil water' and are anoxic (lacking oxygen). The catchment area of the lake is 231,000 km2 (89,000 sq mi). Two main rivers flow into the lake, as well as numerous smaller rivers and streams (whose lengths are limited by the steep mountains around the lake). There is one major outflow, the Lukuga River, which empties into the Congo River drainage.

The lake has a complex history of changing flow patterns, due to its high altitude, great depth, slow rate of refill and mountainous location in a turbulently volcanic area that has undergone climate changes. Apparently it has rarely in the past had an outflow to the sea. It has been described as 'practically endorheic' for this reason. The lake's connection to the sea is dependent on a high water level allowing water to overflow out of the lake through the Lukunga into the Congo.

Due to the lake's tropical location, it suffers a high rate of evaporation. Thus it depends on a high inflow through the Ruzizi out of Lake Kivu to keep the lake high enough to overflow. This outflow is apparently not more than 12,000 years old, and resulted from lava flows blocking and diverting the Kivu basin's previous outflow into Lake Edward and then the Nile system, and diverting it to Lake Tanganyika. Signs of ancient shorelines indicate that at times Tanganyika may have been up to 300 m lower than its present surface level, with no outlet to the sea. Even its current outlet is intermittent and may not have been operating when first visited by Western explorers in 1858.

The lake may also have at times had different inflows and outflows: inward flows from a higher Lake Rukwa, access to Lake Malawi and an exit route to the Nile have all been proposed to have existed at some point in the lake's history.[6]

There are several islands in Lake Tanganyika. The most important of them are

Neolamprologus cylindricus: One of many cichlid fish species of Tanganyika

The lake holds at least 250 species of cichlid fish and 75 species of non-cichlid fish,[7] most of which live along the shoreline down to a depth of approximately 180 metres (590 ft). The largest biomass of fish, however, is in the pelagic zone (open waters) and is dominated by six species: two species of "Tanganyika sardine" and four species of predatory Lates (related to, but not the same as, the Nile perch that has devastated Lake Victoria cichlids). Lake Tanganyika is considered the oldest of the East African lakes, and has the most morphologically and genetically diverse groups of cichlids. This lake also has the largest number of endemic cichlid genera of all African lakes.[8] Almost all (98%) of the Tanganyikan cichlid species are endemic to the lake, and Lake Tanganyika is thus an important biological resource for the study of speciation in evolution.[3][9] Among the non-cichlid fish, 59% of the species are endemic.[7] Lake Tanganyika is the most diverse extent of adaptive radiation.[8]

Many species of cichlids from Lake Tanganyika, such as fish from the brightly coloured Tropheus genus, are popular fish among aquarium owners due to their bright colors. Recreating a Lake Tanganyika biotope[10] to host those cichlids in a habitat similar to their natural environment is also popular in the aquarium hobby. 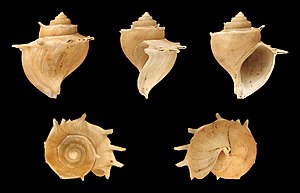 The shell of the endemic thallasoid freshwater snail Tiphobia horei with its elaborate shape and spines.

Lake Tanganyika is home to a large number of invertebrates, including many endemics:

A total of 68 freshwater snail species (45 endemic) and 15 bivalve species (8 endemic) are known from the lake.[11] Many of the snails are unusual for species living in freshwater in having noticeably thickened shells and/or distinct sculpture, features more commonly seen in marine snails. They are referred to as thallasoids, which can be translated to "marine-like".[12] All the Tanganyika thallasoids, which are part of Prosobranchia, are endemic to the lake.[12] Initially they were believed to be related to similar marine snails, but they are now known to be unrelated. Their appearance is now believed to be the result of the highly diverse habitats in Lake Tanganyika and evolutionary pressure from snail-eating fish and, in particular, Platythelphusa crabs.[7][12][13] A total of 17 freshwater snail genera are endemic to the lake, such as Lavigeria, Reymondia, Spekia, Tanganyicia and Tiphobia.[12] There are about 30 species of non-thallasoid snails in the lake, but only five of these are endemic, including Ferrissia tanganyicensis and Neothauma tanganyicense.[12] The latter is the largest Tanganyika snail and its shell is often used by small shell-dwelling cichlids.[14]

Crustaceans are also highly diverse in Tanganyika with more than 200 species, of which more than half are endemic.[7] They include 10 species of freshwater crabs (9 Platythelphusa and Potamonautes platynotus; all endemic), at least 11 species of small atyid shrimp (Atyella, Caridella and Limnocaridina), a palaemonid shrimp (Macrobrachium moorei), and several copepods.[15][16]

Among Rift Valley lakes, Lake Tanganyika far surpasses all others in terms of crustacean and freshwater snail richness (both in total number of species and number of endemics).[11] For example, the only other Rift Valley lake with endemic freshwater crabs is Lake Kivu with two species.[17]

The diversity of other invertebrate groups in Lake Tanganyika is often not well-known, but there are at least 20 described species of leeches (12 endemics),[18] 9 sponges (7 endemic), 6 bryozoa (2 endemic), 11 flatworms (7 endemic), 20 nematodes (7 endemic), 28 annelids (17 endemic)[7] and the small hydrozoan jellyfish Limnocnida tanganyicae.[19]

It is estimated that 25–40% of the protein in the diet of the approximately one million people living around the lake comes from lake fish.[20] Currently, there are around 100,000 people directly involved in the fisheries operating from almost 800 sites. The lake is also vital to the estimated 10 million people living in the greater basin.

Lake Tanganyika fish can be found exported throughout East Africa. Commercial fishing began in the mid-1950s and has had an extremely heavy impact on the pelagic fish species; in 1995 the total catch was around 180,000 tonnes. Former industrial fisheries, which boomed in the 1980s, have subsequently collapsed. 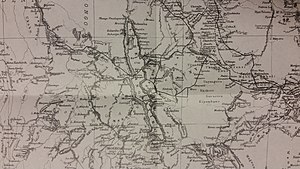 It is thought that early Homo Sapiens was making an impact on the region already during the stone age. The time period of the Middle Stone Age to Late Stone Age is described as an age of advanced hunter-gatherers. It is believed they would have caused megafaunal extinctions.[23]

There are many methods in which the native people of the area were fishing. Most of them included using a lantern as a lure for fish that are attracted to light. There were three basic forms. One called Lusenga which is a wide net used by one person from a canoe. The second one is using a lift net. This was done by dropping a net deep below the boat using two parallel canoes and then simultaneously pulling it up. The third is called Chiromila which consisted of three canoes. One canoe was stationary with a lantern while another canoe holds one end of the net and the other circles the stationary one to meet up with the net. [24]

The first known Westerners to find the lake were the British explorers Richard Burton and John Speke, in 1858. They located it while searching for the source of the Nile River. Speke continued and found the actual source, Lake Victoria. Later David Livingstone passed by the lake. He noted the name "Liemba" for its southern part, a word probably from the Fipa language, and in 1927 this was chosen as the new name for the conquered German First World War ship Graf von Götzen which is still serving the lake up to the present time.[25]

The lake was the scene of two celebrated battles during World War I.

With the aid of the Graf Goetzen (named after Count Gustav Adolf Graf von Götzen, the former governor of German East Africa), the Germans had complete control of the lake in the early stages of the war. The ship was used both to ferry cargo and personnel across the lake, and as a base from which to launch surprise attacks on Allied troops.[26]

It therefore became essential for the Allied forces to gain control of the lake themselves. Under the command of Lieutenant Commander Geoffrey Spicer-Simson the British Royal Navy achieved the monumental task of bringing two armed motor boats HMS Mimi and HMS Toutou from England to the lake by rail, road and river to Albertville (since renamed Kalemie in 1971) on the western shore of Lake Tanganyika. The two boats waited until December 1915, and mounted a surprise attack on the Germans, with the capture of the gunboat Kingani. Another German vessel, the Hedwig, was sunk in February 1916, leaving the Götzen as the only German vessel remaining to control the lake.[26]

As a result of their strengthened position on the lake, the Allies started advancing towards Kigoma by land, and the Belgians established an airbase on the western shore at Albertville. It was from there, in June 1916, that they launched a bombing raid on German positions in and around Kigoma. It is unclear whether or not the Götzen was hit (the Belgians claimed to have hit it but the Germans denied this), but German morale suffered and the ship was subsequently stripped of its gun since it was needed elsewhere.[26]

The war on the lake had reached a stalemate by this stage, with both sides refusing to mount attacks. However, the war on land was progressing, largely to the advantage of the Allies, who cut off the railway link in July 1916 and threatened to isolate Kigoma completely. This led the German commander, Gustav Zimmer, to abandon the town and head south. In order to avoid his prize ship falling into Allied hands, Zimmer scuttled the vessel on July 26, 1916. The vessel was later raised in 1924 and renamed MV Liemba (see transport).[26]

In 1965 Argentinian revolutionary Che Guevara used the western shores of Lake Tanganyika as a training camp for guerrilla forces in the Congo. From his camp, Che and his forces attempted to overthrow the government, but ended up pulling out in less than a year since the National Security Agency (NSA) had been monitoring him the entire time and aided government forces in ambushing his guerrillas.[citation needed]

In 1992 Lake Tanganyika featured in the British TV documentary series Pole to Pole. The BBC documentarian Michael Palin stayed on board the MV Liemba and travelled across the lake.

Since 2004 the lake has been the focus of a massive Water and Nature Initiative by the IUCN. The project is scheduled to take five years at a total cost of US$27 million. The initiative is attempting to monitor the resources and state of the lake, set common criteria for acceptable level of sediments, pollution, and water quality in general, and design and establish a lake basin management authority.[citation needed]

Because of increasing global temperature there is a direct correlation to lower productivity in Lake Tanganyika [27] Southern winds create upwells of deep nutrient-rich water on the southern end of the lake. This happens during the cooler months (May to September). These nutrients that are in deep water are vital in maintaining the aquatic food web. The southernly winds are slowing down which limits the ability for the mixing of nutrients. This is correlating with less productivity in the lake.