Joseph Mulenga Chibangu professionally known as Joe ‘The Ambassador’ Chibangu (21 August 1975—3 February 2017) was a Zambian musician, songwriter and music producer. He was one of the pioneers of contemporary Zambian music alongside other artists such as the Black Muntu, Shatel, Jordan Katembula (JK), Chilu Lemba, DaNNy, Mainza and Daddy Zemus.

Chibangu was born on 21 August 1975 in Ndola. He started doing music in 1995 after he was inspired by his late father who was a music producer.[1] He was exposed to public performances at a tender age of 13 when he performed in churches and schools. He is said to have written his first song at the age of 15. After he completed his grade 12 in 1994 in Ndola, he chose to pursue music full-time. He went to a musical school in Kitwe where he learned keyboard as well as to read and write music.[2]

He was part of the Rap Prophets, who were among the first rap groups to gain popularity and used to feature on Sounds Good. He came to Lusaka in 1997 and joined the versatile B-Sharp Band with which he toured the country. With the B-Sharp, he was able to perform alongside the likes of Ackim Simukonda, Maureen Lilanda and Maria Nkhoma. His first engineering experience was at Feedback Studio in 1998 before going to Mondo Music in 1999.[2] 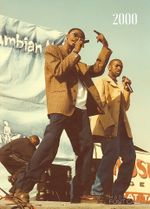 He then moved and formed Melt Down with fellow artiste Mainza. The duo released R&B hits such as "Na Bwalya". He also worked with Yesu Culture, a gospel and afro rhythm band.

Before releasing his own album, Chibangu worked and collaborated with other artists. His debut album was “The Ambassador” and was released under Mondo Music.

In 2000, Chibangu recorded 7 songs with fellow artiste Chilu Lemba. The most well known was "Shibuka" (Kamale) off Mondo Music’s ‘The Rhythm Nation Project’.

He had experimented with the kalindula sound on JK’s album to such great effect as evidenced on the song ‘Bana Malama’, a revamped version of Laban Kalunga’s ‘Bashi Malama’.[2]

He later took a background role in the music industry but continued working with upcoming artists. In late 2016, Chibangu was featured on the song “I Miss You” by Petersen Zagaze produced by Mzenga Man. He also featured on a song “Sinichitila Kadala” with the new group 408 Empire in 2017, which was made available online few hours after Chibangu's death.[3]

Chibangu was a previous winner of the Best Male Award at the Azami Awards. He was also a two time nominee for the Best Male Southern Africa at the KORA Awards in South Africa.[4]

Chibangu was married to Jubilee and had three children.[2]

On 3 February 2017, Chibangu died at his home in Thornpark, Lusaka. He was rushed to the hospital where his death was confirmed.[1] He was 41 years old.[5] He was put to rest on 7 February 2017 at Memorial Park Cemetery in Lusaka.

He was given an artistic send off with various live musical performances held at the Mulungushi Conference Center.