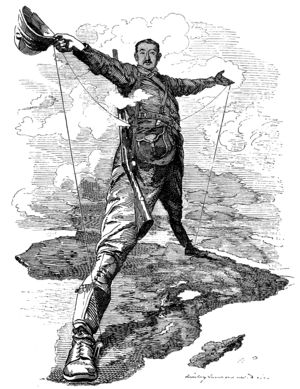 The Rhodes Colossus: Caricature of Cecil John Rhodes, after he announced plans for a telegraph line and railroad from Cape Town to Cairo. 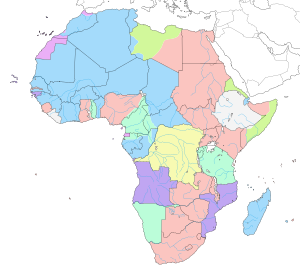 Under British control or influence, 1914
This map shows the chain of colonies from the Cape to Cairo through which the railroad would run. From 1916, Tanganyika Territory was added filing in the gap.

Overview of routes discussed. Not all links displayed were finished. 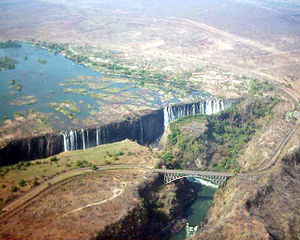 The Cape to Cairo Railway is an uncompleted project to cross Africa from south to north by rail. This plan was initiated at the end of the 19th century, during the time of Western colonial rule, largely under the vision of Cecil Rhodes, in the attempt to connect adjacent African possessions of the British Empire through a continuous line from Cape Town, South Africa to Cairo, Egypt. While most sections of the Cape to Cairo railway are in operation, a major part is missing between northern Sudan and Uganda.

Imperialist and entrepreneur Cecil Rhodes was instrumental in securing the southern states of the continent for the British Empire and envisioned a continuous "red line" of British dominions from north to south. A railway would be a critical element in this scheme to unify the possessions, facilitate governance, enable the military to move quickly to hot spots or conduct war, help settlement and enable intra- and extra-continental goods trade. The construction of this project presented a major technological challenge.

France had a somewhat rival strategy in the late 1890s to link its western and eastern African colonies, namely Senegal to Djibouti. Southern Sudan and Ethiopia were in the way, but France sent expeditions in 1897 to establish a protectorate in southern Sudan and to find a route across Ethiopia. The scheme foundered when a British flotilla on the River Nile confronted the French expedition at the point of intersection between the French and British routes, leading to the Fashoda Incident and eventual diplomatic defeat for France. The Portuguese considered an Angola to Mozambique railway to link west with east and produced the "Pink Map" representing their claims to sovereignty in Africa (to link Angola and Mozambique). Opposition to British rule in South Africa was settled after the First and Second Boer Wars (ended 1902 but only incorporating its two states into a union Republic in 1910).

British interests had to overcome obstacles of geography and climate, and the competing imperial schemes of the French and Portuguese mentioned above and of the Germans. In 1891, Germany secured the strategically critical territory of German East Africa, which along with the mountainous rainforest of the Belgian Congo precluded the building of a Cape-to-Cairo railway.

In 1916 during World War I British and British Indian soldiers won the Tanganyika Territory from the Germans and after the war the British continued to rule the territory, which was a League of Nations mandate from 1922. The continuous line of colonies was complete. The British Empire possessed the political power to complete the Cape-Cairo Railway, but economic issues such as the Great Depression prevented its completion before World War II. After World War II, wars of national liberation and the demise of colonialism removed the will among both outgoing and incoming powers to complete the railroad.

Egypt has a rail system that as early as 1854 connected Alexandria and Cairo, and that currently goes as far south as Aswan. In Egypt the railway is 1,435 mm (4 ft 8 1⁄2 in) . After a ferry link up on the Nile, the railway continues in Sudan from Wadi Halfa to Khartoum at the 1,067 mm (3 ft 6 in) narrow gauge; see Northern Africa Railroad Development. This part of the system was started by Lord Kitchener in 1897 when he subjugated the Mahdist uprising. Further railway links go south, the most southern point being Wau. A large part of the Sudanese railway network is currently in disrepair due to political turmoil.

East Africa has a network of narrow gauge 1,000 mm (3 ft 3 3⁄8 in) railways that historically grew from ports on the Indian Ocean and went westward, built in parallel under British and German colonial rule. The furthest string north was the Uganda Railway. Eventually these networks were linked, so that today there is a continuous rail connection between Kampala, Uganda, on Lake Victoria to the coastal cities of Mombasa in Kenya and Dar es Salaam in Tanzania. Up to the break-up of the East African Community in 1977, these companies operated as East African Railways, but operate today as different national companies: the Uganda Railways Corporation Uganda railways corporation's assets were sold over 13 years ago when government failed to run the corporation, as the cost of running it was greater than the returns. Today, railway business in Uganda is run by Rift Valley Railways of Kenya, the Kenya Railways Corporation, and the Tanzania Railways Corporation.

From Dar es Salaam, a 1,860 km link to Kapiri Mposhi in Zambia was completed after six years by workers and with main funding by China in 1976. This Tanzania-Zambia-Railway (TAZARA) was built to connect landlocked Zambia and its mineral wealth to a port on the Indian Ocean, independent from port connections in South Africa, a frequent rival economic competitor in the mining sectors or Mozambique, at that time Portuguese-controlled territory. Not intended in the grand picture of the Cape to Cairo Railway, the TAZARA fills a critical link. This connection is the 1,067 mm (3 ft 6 in) gauge of the southern part of Africa.

In 1998, a transshipment hub was built at Kidatu in southern Tanzania to connect the metre gauge Central Line (Tanzania) with the Cape gauge TAZARA line. This also shortened the distance.

The southern section was completed during British rule before the First World War and has an interconnecting system of national railways using the Cape-gauge of 1,067 mm (3 ft 6 in). Construction started from Cape Town and went parallel to the Great North Road to Kimberley, through a part of Botswana to Bulawayo. From this junction the link proceeds further north, today operated by the National Railways of Zimbabwe, to the Zambezi crossing. The Victoria Falls Bridge was completed in 1905. The connection is picked up by Zambia Railways and continues to Kapiri Mposhi which is the transition point to the TAZARA link to Tanzania.

The concept of the Cape to Cairo Railway is not dead. While the current turmoil in Sudan is an obstacle to its completion, tangible concepts have been forwarded to complete the link between Sudan and East Africa for economic reasons.[1] This would complete a somewhat awkward Cape to Cairo line with three gauges ({{#invoke:Track gauge|main} } twice) and three breaks of gauge.

The Court Treatt expedition, an attempt to travel from Cape to Cairo by road, was made in 1924 using two cars.[2] The Cape to Cairo Road was planned to roughly connect the same countries. That plan was updated with the Cairo–Cape Town Highway plan, large sections of which are paved and passable.