Alice Lenshina was a Zambian woman and self-appointed "prophetess" who is noted for her part in the "Lumpa Uprising", which claimed 700 lives.[1] [2][3]

Lenshina founded and led the Lumpa Church in 1957, a religious sect that embraced a mixture of Christian and native beliefs and rituals.[4] The Lumpa Church rejected the authority of any "earthly government", it refused to pay taxes and it established its own tribunals. Shortly after Zambia became independent under President Kenneth Kaunda, she and her followers were engaged in the so-called "Lumpa Uprising". The uprising was suppressed and she was detained, but the Lumpa Church was never entirely eradicated.

She was born Alice Mulenga Lubusha in 1920 in the Chinsali district of the northern province of Northern Rhodesia. Alice was her baptismal name, while Mulenga was her traditional African name. The name "Lenshina" was a Bemba form of the Latin word "regina" ("queen").

Situated in a remote part of Northern Rhodesia, Chinsali district was a battleground for two competing Christian missions: the Roman Catholic Missionaries of Africa (the "White Fathers"), based at Llondola from 1934, and the United Free Church of Scotland, based at Lubwa from 1905. One of the Lubwa missionaries was David Kaunda, father of Kenneth Kaunda who became the first president of Zambia and who was a firm opponent of the Lumpa sect.

An aerial view of Alice Lenshina's Lumpa Church (Sione) and village near Chinsali.

Lenshina became very ill with cerebral malaria in September 1953 and fell into a deep coma. According to her disciples, Lenshina died and resurrected twice and that during these phases, she was taken to a very beautiful lake where she had an interaction with Godly beings. She was sent back to earth with instructions that she must preach the word of God to the people.[5] She became the focus of a revival movement at Lubwa Mission, where she was baptized. Lenshina preached a Christian doctrine with baptism as the only observance. She attacked witchcraft and sorcery, and condemned the consumption of alcohol and the practice of polygamy. A grand temple was built at Zion (the name given to her home village) in 1958. Gradually the revival became a witchcraft eradication movement and evolved into an independent church called the Lumpa Church (Lumpa means Super, Supreme) in 1955. The new church rapidly joined the competition for souls against the Roman Catholic Church and the Church of Scotland. Lumpa was so successful that by the late 1950s it may have had up to 150,000 members in the northern and eastern provinces of Northern Rhodesia. The church's drive for membership was so aggressive that it was seen as a political threat by the colonial Northern Rhodesia government.

At first the Lumpa Church was close to the main Black organization fighting for independence, the Northern Rhodesia African National Congress (ANC). However, when Kenneth Kaunda left the ANC in 1958 and formed the more militant United National Independence Party (UNIP) there arose a competition for members between the new church and the new party. Villages were split as Lumpa leaders ordered their members to establish separate villages by moving out of villages where they lived alongside UNIP's members. The conflict between UNIP and the Lumpa Church reached a climax in July to October in 1964, just before Northern Rhodesia's independence. On July 24, 1964 a gunbattle broke out between UNIP and Lumpa Church members. The resulting riots were only quelled by the intervention of State troops, and the proclamation of a state of emergency by the new pre-independence Prime Minister, Kenneth Kaunda. About a thousand people died in the clashes between Lumpa Church adherents, UNIP's members and the security forces. Approximately 15,000 Lumpa Church members fled and took refuge in Congo; some of them never returned to Zambia. The Lumpa Church was banned on 3 August 1964 and Lenshina surrendered to police a few days later.[6]

Alice Lenshina herself played no significant role in the Lumpa Church's political activities. She regretted the fact that the political actions weakened the religious impact of her message, which stressed the sanctity of marriage, opposed both polygamy and traditional African folk magic and promoted the upliftment of common people, especially women.

Lenshina never faced a trial but was detained by Kenneth Kaunda in Mumbwa District, beginning in August 1964. Her husband, Petros Chintankwa (who died in 1972), was detained with her. In 1965 they were moved to Kalabo District, near the Angolan border, but they escaped in October 1967. They were caught, jailed for 6 months and restricted in Mkushi District. In May 1970 Kaunda placed her in detention and ordered the destruction of her temple church in her home village of Kasomo. Finally she was released from detention in December 1975 but was put under house arrest in Lusaka's New Chilenje compound along Nkunda Road.

Lenshina was married twice; to Gibson Nkwale with whom she had her first child. After her husband died, she got married to Petros Chintankwa, a cousin of her first husband, who adopted her.[5] 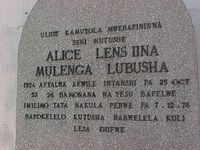 Burial site of Lenshina at the destroyed church, Zion, which her followers built.

Lenshina died on 7 December 1978 while under house arrest and was eventually buried at Kasomo village where the Kamutola Church stood.

The Lumpa Church continues to exist to this day, though it is split and called by various names, the most prominent of which are Uluse Kamutola Church, whose headquarters are in Kapiri Mposhi and its membership ranges from 3,000 to 4,000 and is headed by one of Lenshina’s former personal assistants, Maggie Kasungami Mfula (the overseer). Mfula has shepherded her group from as far back as the early 70s when they had been in exile in the Congo DRC. Others include the Jerusalem Church, under Bubile (Daughter to Lenshina) and New Jerusalem Church, under Nkaya, in Kitwe's Chimwemwe Township.

In a 2008 interview with the Sunday Post, Mfula appealed to the government to lift the ban on the Lumpa Church and restate the name.[5] 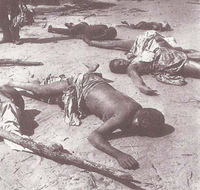 According to Mfula, the allegations leveled against Lenshina and her growing cadre of followers was just a ploy to water down her popularity. “The success achieved by Lenshina in such a short time of her ministry’s existence was a thorn in the flesh of both Ilondola and Lubwa missionaries. Others launched a vicious campaign to discredit her and persuade defectors to return to their former respective missions,” she said. “By this time bishops and priests had long awakened to the fact that Lenshina’s church posed a major threat to the Catholic church and other churches had decided to halt this advance at all costs.”[5]

Mfula said the problem intensified to such an extent that in October, 1963 a combined team of UNIP and government forces attacked Chitambo Village where many lives and properties were lost. “In addition the following Lumpa villages were attacked; Bulanda, Lulumbi, Kameko, Chapaula, Shacepa, Chilanga, Sione HQ, Chasosa, Chipoma, Ishuko, Itonta, Chakosa and Isumba Village,” Mfula said. “In these villages, thousands of people died and their bodies were buried in mass graves.” She said these are some of the things that led to the banning of the Lumpa Church by the government on August 3, 1964.

"Before Lumpa Church (Sione) headquarters was attacked by the government forces in 1963, Lenshina had already escaped the place for Chilungululu Mountains in Kasama district where she hid in a dense thicket on an anthill,” Mfula said. “The government troops came in large numbers, armed with sophisticated weapons and opened fire on innocent and harmless people. They threw grenades into the church building killing women and children who had taken refuge. The church building (Kamutola) was partially damaged.” Mfula said the security forces used graders to clear the area, which was littered with bodies and one mass grave was dug at Chinsali. “This grave was filled to capacity and some bodies remained uncollected in the bush,” she said. “There could be more mass graves in Northern Province than people know of because bodies of Lumpa members were usually buried away from operational areas.”[5]