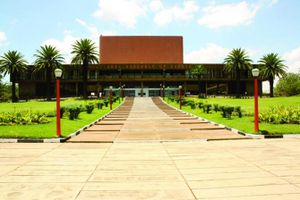 Under a parliamentary democracy, Parliament oversees Government administration and subjects its activities to detailed scrutiny on behalf of the electorate.

Functions of the Committee

The Committee may circulate the reports and recommendations of the Committee to Members of the National Assembly and, if within the prescribed period no objection in writing signed by a member has been received by the Clerk, the reports or recommendations are deemed to have been approved by the National Assembly. The prescribed period is not less than four sitting days, if the House is in session, and twenty-one days if the House stands adjourned.

Provided that on representation from the Speaker that the matter is urgent, the Standing Orders Committee may prescribe a shorter period.

The Committee examines and approves the estimates of the National Assembly and examines matters pertaining to the variation of parliamentary procedure, customs and traditions and any matters connected therewith.