List of Speakers of the National Assembly of Zambia 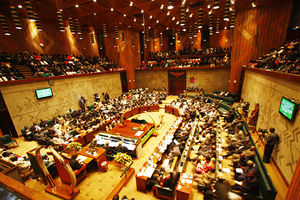 List of Speakers of the National Assembly of Zambia

The Office of the Speaker in the Parliament of Zambia is established under Article 69(1) of the Constitution of the Republic of Zambia, which states:

The election of the Speaker is the first business that a new Assembly transacts at its first meeting. This is so because Article 69(3) of the Constitution of the Republic of Zambia states:

No business shall be transacted in the National Assembly (other than the election to the Office of Speaker) – at any time when the Office of the Speaker is vacant (The Constitution of Zambia, 1996).[1]

Below is a list of Speakers of the Legislative Council of Northern Rhodesia:

Below is a list of Speakers of the National Assembly of Zambia:

The Functions of the Speaker

The Speaker is the Presiding Officer of the National Assembly and his authority is recognised and respected by all Hon. Members of Parliament. He regulates debates and enforces strict observance of rules which govern orderly conduct in the House. He calls upon Members who wish to speak to do so. He preserves the order and dignity of proceedings in the Assembly. He is the spokesman and the representative in its powers, proceedings and dignity of the institution’s external relations with other authorities and persons outside Parliament.

The Speaker is the custodian of parliamentary procedure, bills and all parliamentary papers and publications. All Members of Parliament look to him for guidance in matters of procedure, and he decides on points of order. He may give his rulings immediately or defer his decision to a later date or time. His rulings constitute precedents by which the subsequent Speakers of the Assembly will be guided. The Speaker’s ruling or, indeed, that of the Deputy Speaker and the Deputy Chairman of Committees of the whole House, may not be criticised or questioned except by a substantive motion of which notice has been given. An affront to the Speaker or the Chair is an affront to the entire House.

The Speaker is the guardian of the dignity and privileges of the House; and it is only through him that Members of the National Assembly claim and enjoy their rights of access to the Head of State, the President.

The Speaker has wide powers in the House. He can call Members to order for the use of unparliamentary language; for any unbecoming behaviour; for irrelevance; and for tedious repetition. He can order Members to resume their seats or to withdraw a word or a phrase or order a Member to apologise in accordance with the Standing Orders; and he can order a Member to leave the Chamber. If a Member disregards the authority of the Chair or contravenes the rules of the Assembly by persistent and willful obstruction or otherwise, the Speaker or the Chairman of Committees has the authority to ‘name’ that Member, after which the Leader of Government Business in the House (the Vice-President) or any Cabinet Minister present would move a motion for the appropriate punishment to be meted out, which may include a suspension from the House. If the Member does not leave the House, the Speaker orders the Sergeant-at-Arms to remove him by force.

In addition to presiding over the debates of the House, the Speaker is the Chairman of all Sessional and Select Committees, but physically chairs the Standing Orders Committee.