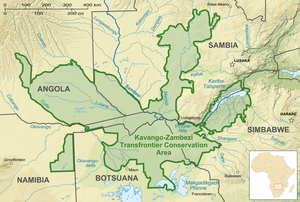 Kavango - Zambezi Transfrontier Conservation Area, also known as KAZA is situated in a region where the international borders of five countries converge. It includes a major part of the Upper Zambezi basin and the Okavango basin and Delta. The zone includes the Caprivi Strip of Namibia, the southeastern corner of Angola, southwestern Zambia, the northern wildlands of Botswana and western Zimbabwe. The centre of this area is at the confluence of the Chobe River and Zambezi River where the borders of Botswana, Namibia, Zambia and Zimbabwe meet. It will incorporate notable sites such as Chobe National Park, Hwange National Park, the Okavango Delta in Botswana and the Victoria Falls.

The initiative was created in cooperation with Peace Parks Foundation and the World Wide Fund for Nature. It developed from the Okavango-Upper Zambezi International Tourism Initiative (OUZIT) and the “Four Corners” Transboundary Natural Resource Management. On 24 July 2003, the Ministers responsible for tourism in Angola, Botswana, Namibia, Zambia and Zimbabwe met in Katimo Mulilo, Namibia and agreed the vision for the KAZA TFCA initiative.[1] In July 2006 SADC's endorsed the KAZA TFCA as a SADC project and on 7 December 2006 the Ministers of Environment and Tourism of the five partner countries signed a Memorandum of Understanding at Victoria Falls, Zimbabwe, providing for work towards the establishment of the KAZA TFCA.[1]

In November 2014 Zambia and Zimbabwe introduced a common KAZA Visa. Angola, Botswana and Namibia are expected to join the scheme in the future.[2]

The national parks and game reserves within the zone are.

There are also various Wildlife Management, Hunting Blocks involved. The Victoria Falls, shared by Zambia and Zimbabwe, is a World Heritage Site.