James Sakala is a Zambian songwriter, producer and afro-jazz/Kalindula musician from Mkushi in the Central Province of Zambia.

Sakala was born in Bulawayo, Zimbabwe on 17 October 1983.[1] In 1986 his family moved to Zambia and settled in Fikolwa area at Kabati Village in Mkushi where he grew up and completed his education. It was here that he started expressing himself through music and drama at a very young age and became more convinced of his passion for music when he learnt to sing "Namusonda" by P.K. Chishala.[2]

Over the years, James Sakala has nurtured his skills by working as a producer, session guitarist, and singer/songwriter at local recording studios.[2] In 2005 he and a group of friends formed Bazibe Arts Theatre, a Mkushi based group, and he was made lead singer and dance director. The group underwent training and was funded by the African Development Bank to bring sensitization about water and sanitation in the community. 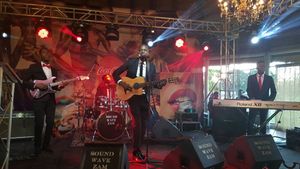 Sakala with The Elect Band performing at the launch of new tagline for Fanta "Test the Feeling" in 2016.

During K’millian's show in Mkushi, Sakala was called out from the audience by the singer to come on stage and sing to one of his songs. He sang so well and K'millian later encouraged him to pursue music and move to Lusaka. Sakala took the advise and traveled to Lusaka for the first time in 2007 and was auditioned by Joe Chibangu the Ambassador. This marked the beginning of his music career. He started out as a backup singer for K’millian and later Mampi, Ty2, Crystal Shawn and Ozzy from 2008 to 2009.[1]

In 2012 he became a member of The Elect Band as a percussionist and rhythm guitar player. He recently became a lead singer of the band. In 2013 he met producer Ben Blazer who offered him studio time to record the song Akatina.

Sakala's first biggest performance was at The Stanbic Jazz Festival in 2014[3] at The Misty Jazz Café and Restaurant in Lusaka as a supporting artist. The festival featured international artistes Earl Klugh, Oliver Mtukudzi and Mi Casa.[4]

Sakala was named a 2015 Proflight brand ambassador along with four other artistes who include hip hop artiste, Chef 187 and rapper, Cleo Ice Queen.[5] In a Facebook post on the MTN Zambia official page on 13 April 2016, MTN announced it had signed James Sakala as its Youth Brand Ambassador alongside other artists who included Pompi, Trinah and Mutaz from Radio Christian Voice.[6]

In 2016, Sakala performed at the Gaborone Music and Cultural Week featuring Jonathan Butler, Mumba Yachi and Botswana band, Sereetsi and the Natives.

In the same year 2016, Zimbabwean legendary singer Oliver Mtukudzi collaborated with Sakala and the duo recorded a song at Pakare Paye (Mtukudzi's studio) in Zimbabwe. The collaboration was to promote the preservation of the authenticity of the original Zambian sound, Kalindula. Sakala also had a privilege of sharing the stage with the world's multiple grammy award winning reggae band UB40 at the Stanbic Music Festival in Lusaka, Zambia. The festival took place in October 2016 and featured other local artists which included JK, Wezi, Pompi, Afunika and Israel.