Ingombe Ilede is an archaeological site in Zambia, on a hill near the confluence of the Zambezi and Lusitu rivers, near the town of Siavonga close to the Kariba Dam. The name means "the sleeping cow". The site was uncovered in 1960 by government workers. the site was excavated by the archaeologist J.H Chaplin.

The place is thought to have been a small commercial state or principality whose chief item of trade was salt. Textile, copper ore, ceramics, gold and other findings from the 7th till 16th century make this one of the most important archeological sites in the region. The place flowered in the 13th till 15th century, and is supposed to have had trade relations with the Mwenemutapa Empire, people from the Katanga region of the present day DRC and possibly people from India.

Chief items from Mwenemutapa came ivory and gold, and from the Katanga were slaves and copper. The traders from the coast brought with them iron objects, beads, cloth and ceramics which they traded for gold, ivory and slaves. 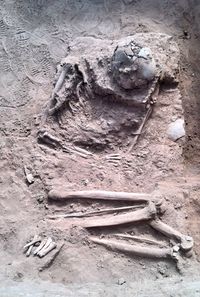 During an excavation of the site, two burial grounds were discovered. One was found containing a skeleton buried with copper ornaments, bracelets and beads. The other burial plot only contained a skeleton. The existence of two different graves proves that social stratification existed at that time. it is believed that the rich burial site must have belonged to a trader and the other, a poor man or slave.

In July 2016, the National Heritage Conservation Commission excavated a skeleton believed to have lived between 700 AD and 1100 AD at Ingombe Illede. The skeleton is of a woman in her early 30s and was found with beads around her neck and metal bracelet, a sign of being a rich woman.