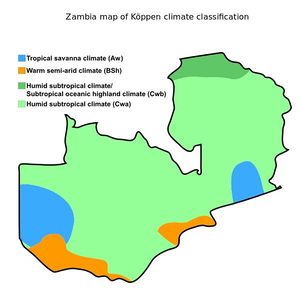 Zambia is a landlocked country located in Southern Africa, to the east of Angola. It has a total area of 752 618 square kilometres (slightly larger than France), of which 9 220 km² are water.

Zambia has a tropical climate, modified by the altitude of the country. There is a rainy season that runs from October/November to March/April and September.

Nine ecoregions in four biomes are represented in Zambia, the most widespread being Miombo, Mopane and Baikiaea woodland savanna, with grasslands (mainly flooded grassland) and evergreen forest also present.

The following table describes the land use in Zambia, as of 2011.

This is a list of the extreme points of Zambia, the points that are farther north, south, east or west than any other location.