Esther Phiri (born 14 January 1987) is a Zambian boxer. She is Zambia’s first female boxer to earn international accolades and became an icon for Zambian women, fighting stereotypes and finding success in and outside the ring.[1]

Esther Phiri was born in Lusaka, Zambia and is the fourth of eight children. Her father was a businessman and her mother stayed at home. Her father died when she was in grade 6 and the family fell on hard times without his income. Esther lived with her grandmother in the low-income urban township of Mtendere and joined her selling groceries and second hand clothes in Mtendere Market. She dropped out of school and became a single mother at age 16.

A turning point in Esther's life came about when an international NGO, Africa Directions, started a youth-centered HIV-awareness project in the area, combining health education and sport. Esther was the only girl in a physical training program that focused on boxing. She was also motivated by boxing videos and took the training seriously despite the negative reaction of some of the young males around her.

Her talent for boxing soon became obvious and she was referred for further training to former Zambian amateur champion Anthony Mwamba, who had made it to the quarter finals of the 1988 Olympics. Mwamba has since prepared Phiri at his Independence Boxing Gym.

Esther made her professional debut at Mindolo Dam in Kitwe on 23 July 2005 against Jota Sumaili of Zambia, fighting her to a four-round draw. Sumaili had won both of her previous bouts on points, against debut boxers.

On August 21, 2005 at Moi International Sport Centre in Nairobi, Kasarani, Kenya, Esther lost a four-round decision to the well experienced Zarika Njeri of Nairobi, who improved her own record to 9-1-1 with the win. Zarika had fought Sweden's Frida Wallberg for the WIBF Intercontinental Junior Lightweight title in Denmark just two months earlier, losing by a unanimous decision.

Esther was not discouraged. In October 2005 she went to Zimbabwe, where she twice took on Monalisa Sibanda, retiring after the first round in the first contest on October 15 and losing by TKO in the second round of their second bout two weeks later.

Training continued on her return, and then she took on pro debut boxer Patience Master from Zimbabwe at the Nchanga Mine Club in Chingola on 6 May 2006, winning by a four-round split decision – her first win in the ring.

On 27 May 2006 she returned to Zimbabwe for a rematch with Patience Master at the International Convention Centre in Harare. This time she knocked Master out in the second round of their scheduled four-rounder.

On 22 October 2006 at the National Sports Development Center in Lusaka, Phiri won a six-round decision over Patience Master in their third encounter of the year.

Esther was then picked to participate in the six-bout all-female "Fists of Steel" Africa vs. USA event at the Moi International Sports Centre in Nairobi, Kenya on 2 December 2006.

When Esther's original opponent - Michelle Linden - failed to turn up, she was matched against Kelli Cofer of Ohio at the last moment for the WIBF Intercontinental Junior Lightweight title. Cofer had previously fought in several full world title bouts but was returning to the ring after surgery for a broken hand sustained in her last match. The late pairing meant Esther was over-weight for the bout with Cofer and she spent a few grueling hours in the gym before weighing in to shed 2 kg and meet the target of 60.2 kg. Esther went on to win an eight-round majority (79-78,77-75,77-77) decision over Cofer who dropped to 13-4-4 (3 KO's).

On 18 March 2007 at Mulungushi Conference Centre in Lusaka, Esther won an eight-round unanimous decision over Monika Petrova of Sofia, Bulgaria to retain the WIBF Intercontinental Junior Lightweight title. Petrova, who has been a regular (if often over-matched) opponent for top fighters in Europe at bantamweight or featherweight (including Anita Christensen, Esther Schouten, Bettina Csabi, Iwona Guzowska and Cathy Brown) fell to 1-10-0 with this loss while Phiri improved to 5-3-1 (1 KO).

On 30 June 2007 at Woodlands Stadium in Lusaka, Esther TKO'd winless Radostina Valcheva of Bulgaria in the second round. Valcheva fell to 0-1-1 after an obvious mismatch.

On 1 December 2007 at Woodlands Stadium in Lusaka, Esther won a controversial eight-round split decision over Belinda Laracuente of New York to retain the GBU Intercontinental Junior Lightweight title. The Lusaka Times reported that “few may agree that the verdict was fair as America’s Belinda Laracuente was a trifle better and could claim the glory as well.” They reported that Phiri was slower and could hardly match the technique and power of Laracuente, described Laracuente as “sharper, cleverer, and more aggressive” and opined that “an ordinary eye” could have given her at least five out of the eight rounds. A rematch was reported to be in the works. Laracuente fell to 23-19-3 (9 KOs). 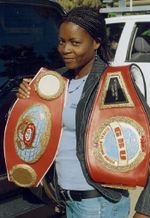 On 4 October 2008 at Woodlands Stadium in Lusaka, Esther Phiri won by a fifth round TKO over Hondi Hernandez of Chandler, Arizona, USA in a scheduled ten-rounder for the GBU Junior Lightweight title. Hernandez dropped to 5-4 (3 KO's)

On 25 April 2009 at Hood Restaurant in Nairobi, Kenya, Esther Phiri won by a fourth round TKO over an "unknown" boxer whose name was variously given as Ratree Kreakae of Thailand or Filipina Viparat Lasuwan of the Philippines, who appeared to have little boxing experience and was knocked down in the second, third and fourth rounds. The promoter and local media such as the Lusaka Times initially reported that Phiri was fighting for a WIBA title but WIBA President Ryan Wissow told WBAN that his organization had nothing to do with this bout or its promoter. The promoters subsequently stated that the fight was for a GBC title.

On November 28, 2009 at the Mulungushi Conference Centre in Lusaka, Terri Blair of Louisville, Kentucky, USA fought to a 10-round draw (98-96,96-96, 94-96) with Esther Phiri for the vacant WIBA Junior Welterweight title. Blair, who had pressured Phiri for the whole fight, stated after the fight “If you want to know the winner of this fight, give us another two rounds just now and see what I am gonna do to her. I have been cheated. I'm ready to fight her again any time, anywhere including now." Phiri's right eyebrow was cut and the fight was halted temporarily in the sixth round to clean the blood. Phiri appeared to be in difficulty for several rounds in mid-fight but later rallied. Blair moved her record to 11-14-3 (6 KO's). The WIBA was reported to have sought a title match between Phiri and Duda Yankovich, not a rematch with Blair, because Yankovich had been the intended opponent for Phiri until her nose was broken in a loss to Holly Holm.

On 29 May 2010 at the Mulungushi Conference Centre in Lusaka, Esther Phiri won a ten-round unanimous (100-91,100-95,100-92) decision over Duda Yankovich of Rio de Janeiro, Brazil for the vacant WIBA Junior Welterweight title. Yankovich fell to 11-2-0 (5 KO's) with her second straight title loss.

Between Rings - The Esther Phiri Story

The publicity following Phiri's wins made her a household name, with billboards with her picture lined on the streets.

President Levy Mwanawasa praised Esther for demonstrating her capability to succeed regardless of the many challenges and obstacles prevailing in the area of sport in Zambia and also announced that Phiri would be given a fully furnished three bedroom house for retaining her title against Petrova.

Phiri has also been encouraging adolescent Zambian women to engage in sports not only to guard against unplanned pregnancies and have sexually transmitted disease but to become disciplined and focused. She advises young Zambians to engage in sports as it would take up most of their time which they would spend drinking and engaging in many antisocial vices.

In 2015, Between Rings - The Esther Phiri Story, a documentary film about professional boxing champion Esther Phiri was premiered. The film narrates Phiri’s battle to overcome poverty and make a few sacrifices along her path to became one of Zambia’s most talked about female athletes. Phiri’s decision to return to education and become a 7 time world welterweight champion has defied all cultural expectations. She is often noted as a symbol of female empowerment especially through her role of encouraging adolescent Zambian women to take part in sports. ‘Between Rings’ was written and directed by filmmakers Jessie Chisi and Salla Sorri of Helmi Films.