Crawford Mandumbwa (born 14 February 1969) is a Zambian multi-talented artist and visual commentator based in Francistown, Botswana where he has taught and lived for most of his recent life. He dabs in fine arts, graphics, photography, multimedia and his new found love - 3D modelling.[1]

Mandumbwa was born in 1969 in Zambezi in the North Western Province of Zambia, whose people are Luvale. He spent most of his childhood in Kitwe where he did his primary education at Prince Charles Primary School (now Matete). He first discovered his artistic gift in Grade 4 when he came across an illustration of an old farm fence and it was etched in his memory. He later reproduced the image and it won him accolades among his peers – and that set the beginning of his journey into the world of creativity.

Mandumbwa was to formally encounter Art while in junior secondary school at Matero Boys where he developed his craft. When later his paper mache sculpture was spiteful trampled on by his jealous classmate, he realised the extent of his gift and never looked back. He later went to Petauke in Eastern Province for his high school, but the school had no Art classes. This led him to study Technical Drawing and briefly entertained thoughts of pursuing Architecture but resorted back to Art when an Art teacher was later deployed to the school. 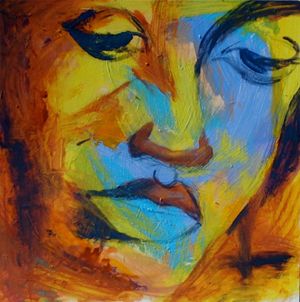 Acrylic on board, "Introspection" by Crawford Mandumbwa

After high school in 1989, Mandumbwa went to Lusaka to take up a job as a Graphic Designer (though he was not formally trained). Later after a chance meeting with a chief designer of the Zambia Information Services (ZANIS) on a bus, he was offered a job in the department where he designed government information posters. He, however, did not stay long in the civil service. His desire to be involved with more challenging creative work saw him walk into an advertising agency (Fleet Foot Advertising Agency) that hired on the spot as a trainee graphic designer.

In 1991 he enrolled with Evelyn Hone College to train for a Diploma in Art Teaching. He initially wanted to major in sculpture but on account of a shortage of equipment at the college, he opted to study pictorial and figure studies. He concurrently pursed the teaching qualification with a Diploma in Graphic Design and completed his studies in 1994.

Before he could take up teaching, a newspaper (The Post), impressed by his portfolio, hired him to design print adverts and develop business graphics for the paper. 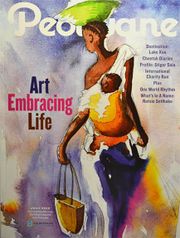 In 1995, while attending one of many graphics workshops in Johannesburg, South Africa his remarkable desktop publishing skills, work ethic and passion attracted the attention a delegate from The Voice Newspaper from Botswana who made him an offer which he took up in June of 1995. After a two-year contract at the paper’s graphics and photography desks, he switched to Art Teaching where he served in the Botswana civil service for five years until 2002 when he moved to John Mackenzie a private school in Francistown as an Art teacher. Besides Art class teaching, he has facilitated art and culture workshops and also been involved in numerous community and public art projects in and around Francistown.

Crawford Mandumbwa has widely traveled and participated in numerous group and solo exhibitions. His work has been collected in Zambia, Zimbabwe, Botswana, South Africa, Taiwan, Brazil, Europe and the United States. His life and works have grace the arts and culture sections of local newspapers and magazines. He has designed anything one can thing of from business cards to gigantic outdoor billboards. In Botswana, he designed an official logo for the Supa Ngwao Museum’s Francistown Centenary Celebrations in 1998. He was also sponsored by the Women’ Institute to animate the wall spaces of the Paediatrics Wards at Nyangabwe Hospital in Francistown.

He is also the designer of the Voice newspaper’s current “Born in Ghetto” billboards in Francistown and Gaborone, Botswana.

In 2006 he commenced a Bachelor of Arts program specialising in Visual Multi-Media with the University of South Africa (UNISA).

In 2010 he attended a workshop on Electronic Advertising in Shenzhen, China.

In 2013, he participated in a month-long exhibition held by the Afreaka Project in Brazil where he showcased his art paintings and also delivered lectures on contemporary art at the Sao Paulo Metro and the University of Sau Paulo, Brazil.[2]

In 2016 he participated in an international Artists workshop in Tainan, Taiwan where artists were challenged to articulate a visual critique to the moral and social ills of our day. In 2015 he used proceeds of his digital artwork to support of a project for a Christian ministry.

In Zambia, some of his works are displayed at the Livingstone Art Gallery in Livingstone and the Gallery at the Intercontinental Hotel in Lusaka.

Mandumbwa is married to his business manager Selestina Seyala Mandumbwa and they have two daughters - Louise and Angelica. Louise is also a visual artist and photographer currently studying in United States of America.

He is still teaching Cambridge Art & Design at John Mackenzie School to date.