Chipata is the 5th developed City in Zambia, behind Lusaka, Ndola, Kitwe and Livingstone, it's population is 455,783. Chipata is the capital of the Eastern Province of Zambia. Having a Town, a Modern Market , a Central hospital, shopping Malls, University,Colleges and a number of schools, Chipata is the business and administrative hub that serves the region. The town boasts a four star hotel, a golf course, an airport, a mosque, and even a "welcome arch".Developed areas includes Kalongwezi, Moth,and Bombay.

The town is the regional head of the Ngoni of Zambia. As such, Ngoni is the primary language, although Nyanja and English are widely spoken, plus some Indian languages, as a large number of Zambian Indians live in the town. Chipata is located near the border with Malawi, and lies on the Great East Road which connects the capitals Lilongwe (130 km) and Lusaka (550 km). The town is a popular access point for the South Luangwa National Park.They is a very good road network in chipata

Chipata was formerly known as Fort Jameson (and informally as "Fort Jimmy"), being named after Leander Starr Jameson, a 19th-century politician and adventurer. Even during the colonial period, few agreed that Jameson, who is mainly known for his part in the unwise Jameson Raid, fully deserved the honour of having any town named after him. Like 'Fort Manning' and 'Fort Rosebery' (Mansa), Fort Jameson was called a "fort" because the local government offices, the "boma", were once fortified. 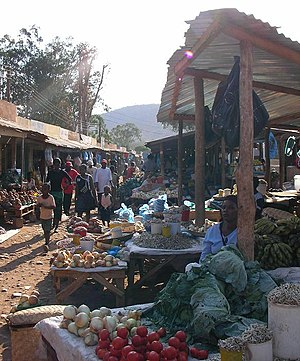 A rail link to Chipata from Malawi (via Mchinji) opened in August 2011.[1] Chipata will now act as the Zambian railhead and entry point from Malawi and beyond. In the pipeline since 1982, the short link (about 35 km) provides a through-route for rail traffic from Zambia via Malawi to the Indian Ocean deepwater port at Nacala in Mozambique.[2] The route and alignment of the line has been laid out, including the site of Chipata station and the basic station building.[3] The route will provide an alternative to two existing rail routes to the Indian Ocean, at Dar es Salaam and Beira.[4]

In 2015 it was proposed to build a railing to Serenje, a small town on the TAZARA railway line.[5]