The Tanganyika sardine, is known as kapenta in Zambia and Zimbabwe (a related but different fish known as dagaa or ndaga is Rastrineobola argentea). Kapenta is really two species (Lake Tanganyika sardine, Limnothrissa miodon and Lake Tanganyika sprat, Stolothrissa tanganicae), both of which are small, planktivorous, pelagic, freshwater clupeid originating from Lake Tanganyika in Zambia. They form the major biomass of pelagic fish in Lake Tanganyika, swimming in large schools in the open lake, feeding on copepods and potentially jellyfish. Their major predators are four species of Lates which are also endemic to Lake Tanganyika, and are related to (but not the same as) the Nile perch in Lake Victoria. All of these pelagic fish have suffered from overfishing in the last two decades.

Limnothrissa miodon is usually around 10 cm long, its maximum length is 17 cm. Stolothrissa tanganicae is smaller at 7 cm (maximum 10 cm).

This fish is caught at night using kapenta rigs, these rigs use mercury lights connected to portable generators to attract the fish to the rig. A dip net measuring roughly six metres in diameter and around 8 to 10 metres in length is then used to bring the fish up from anything from 40 metres (130 ft).[1] 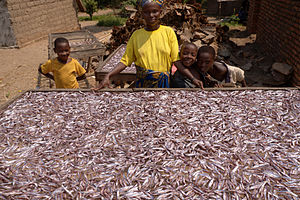 Kapenta fish drying in the sun

Kapenta is usually dried in the sun on a clean surface such as concrete slabs, rocks or netting. Drying on racks gives the best results.[4] Drying takes one day or more, depending on the weather. Unfortunately the kapenta season coincides with the rainy season when the fish congregates[5] and sundrying may not always be possible causing postharvest losses. These losses are mostly economical as the lower quality dried fish fetches a lower price. In the worst case the dried fish is used as chicken feed. Salting before drying is a solution: kapenta is salted at a ratio normally of 2.5 kg per 30 kg (1 lb per 12 lb) of fish, and dried in the hot Zambezi Valley sun. It is a hugely important staple, providing refrigeration-free protein to people of Africa. A cup of dried kapenta will feed a family. Dried kapenta is preferred to the slightly bitter dried dagaa from Lake Victoria, but poor people will buy dagaa because of its lower price.

In Zimbabwe dried kapenta fish are shallow fried with onions, tomatoes and goundnut powder. They are eaten with traditional staple meal called Isitshwala/sadza.

In the 1960s/70s some fishery development projects experimented with smoke-dried kapenta, salted or not, but this never caught on.

Marinated kapenta can be made from kapenta fillets put in vinegar with salt and kept in a refrigerator. After 2 or 3 days the vinegar is discarded and the fish is quickly rinsed with clean water. Then the fillets are put in a mix of olive oil, vinegar, sugar, garlic, chili peppers, and lots of parsley or celery. After another 2 or 3 days in the fridge the marinated fillets are ready to eat.

It is an important bait fish for the African tigerfish (Alestidae family) and, although introduced in Kariba and Cahora Bassa, does not seem to have harmed the environment.

It is an important contributor to the economies of the areas it is caught in.[6]