Lewanika (1842–1916) (also known as Lubosi Lewanika or Lewanika I) was the Lozi Litunga (king or paramount chief) of Barotseland from 1878 to 1916 (with a break in 1884-5). A detailed, although biased, description of King 'Lubossi' (the spelling used) can be found in the Portuguese explorer Alexandre de Serpa Pinto's 1878-1879 travel narrative Como eu atravessei a África (How I Crossed Africa, in English translation). 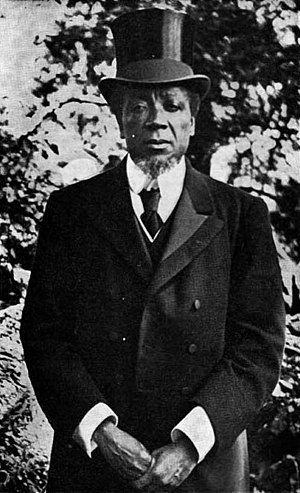 Lewanika photographed during his visit to Edinburgh in 1902

In December 1882 the missionary Frederick Stanley Arnot reached Lealui, the capital of Barotseland, after traveling across the Kalahari Desert from Botswana. King Lewanika kept him for the next eighteen months, then allowed him to move on, but in a westward direction rather than eastward as he had planned. While detained, Arnot taught the king's children to read and undertook some evangelism.[1] Arnot was present when Lewanika received a proposal from the Ndebele for an alliance to resist the white men. Arnot may have helped Lewanika to see the advantages of a British protectorate in terms of the greater wealth and security it would provide.[2] Arnot left Bulozi in 1884 to recover his health and to escape a brewing rebellion against Lewanika.[3]

Lewanika brought Barotseland, now part of Zambia, under British control in 1890, when he agreed with Cecil Rhodes for the region to become a protectorate under the British South Africa Company (BSAC). However, he felt deceived by the BSAC terms as they worked in practice, and he appealed, unsuccessfully, to the British Crown. Lewanika told Dr James Johnston how he had written to the British asking that his kingdom should be made a British Protectorate. He had waited years for a reply and then men had arrived with papers claiming that they had the power to make this happen. The King was reassured as the local missionary. Monsier Coillard, was his interpreter at the meeting and the King was reassured by Coillard's confidence in these men. Lewanika had been thankful that his wish had been granted and he had sent two enormous elephant ivory tusks as a present for Queen Victoria. Lewanika was incensed to find that the men were from a South African company and that the ivory tusks were not with Queen Victoria but as ornaments in the directors board room. Johnston assisted Lewanika in writing a letter of protest. Lewanika was to prove a great help to Johnston as he was able to command assistance for Johnston from nearby subordinate chiefs.[4]

In 1902, Lewanika visited London for the coronation of King Edward VII and Queen Alexandra, where he was treated with respect and had an audience with King Edward and an informal meeting with the Prince of Wales. When asked what he would discuss with the British sovereign, he said "When we kings meet we always have plenty to talk about".[5]

Lewanika's eldest son was named Litia, and succeeded as Yeta III on his father´s death. His third son Imwiko succeeded his brother in 1945, but died three years later and was succeeded by a third brother, Mwanawina III. On his death in 1968, a fourth brother Mbikusita reigned as Litunga from 1968 to 1977 as Lewanika II. A newspaper-article from 1902 mentioned two sons, Imaski and Lubasci, who were educated in the UK at the time, and a son-in-law called Ishi-Kambai.[6] One of his daughters worked as a teacher in his capital.[7]