David Kaunda National Technical High School,[1] also known as DK High School, is a Government Boarding School in Zambia situated in woodlands Prospects Hill or main off Burma Road, along Yotamu Muleya road. The school was initially founded in the year 1934. The school was erected by students and was named after the father to the first republican President of Zambia Reverend David Kaunda who was a missionary and teacher from Nyasaland (now Malawi) 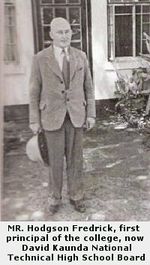 David Kaunda National Technical High School was founded in 1924 [2] by the British Colonial Government, with Mr. F. Hodgson as the first principal. It was opened to meet the needs of children of soldiers of the Northern Rhodesia Regiment as a Trades School under the name Hodgson Training School to provide a variety of courses including carpentry, plumbing, brick-laying, metal craft, metal work and leather work.

The school's name was changed to David Kaunda Secondary Technical School to offer senior secondary school education up to the 'A' levels in 1965. It was a a boys school until 1993, when the school opened its doors to the first girls and has hitherto been a co-education boarding school. In 1995, the first grade 12 girl students graduated.

David Kaunda national Technical High School attracts high performing pupils across Zambia. Candidates who are selected to the school are those who have just completed their Junior secondary school education from all of Zambia's 10 provinces. Priority at selection is given to those who wish to pursue studies in science and technical fields such as Engineering and Medicine.