Chilubi is a settlement on an island in Lake Bangweulu and its swamps, and is headquarters of Chilubi District in the Northern Province of Zambia. 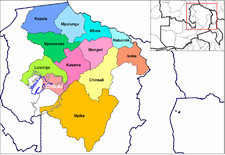 Chilubi Island lies just north of the centre of the eastern side of the lake. It has an unusual zig-zag shape of about five segments, each about 12 km long and 1.5 to 3 km wide. It resembles a Chinese dragon with its head (at the north-west end) just in the open lake and its body and tail (south-east end) in the swamps. The shortest distance on land from nose to tail is 25 km, and it has about 100 km of shoreline. [1] The smaller Nsumbu Island lies 1 km south-east of Chilubi Island. Satellite image:

The shores of Chilubi Island are lined with villages while the interior consists of patches of wooded grassland. The soil is largely sandy and not so fertile, and the only food that grows well in it is cassava, which is the staple of the people on the island. The main settlements on Chilubi Island are Muchinshi, Bukotelo (headquarters of the chief of Chief Chiwanangala, Yombwe, Kashitu, Kapampa, Muule, and Santa Maria, a Catholic mission. [2]

The island is served by passenger ferries from Samfya and Nsombo in Luwingu District and Chaba at the north end of the lake, and there is an airstrip at the mission, which in the past has mostly served the fly doctors service.

The main occupation of the island is fishing and subsistence farming, with some employment provided by schools, a health centre, the District Council and the mission.

The town or large village is situated at the most north-westerly tip of the island. Chilubi is 45 km across the lake from Samfya, 28 km from Chaba and 38 km from Nsombo. Chilubi is unique in Zambia, being the only one of the 72 district headquarters or bomas on an island, with no road connections.[1] A boma was first established during colonial times at the southern tip of the island.[3]