Dr Caleb Mailoni Fundanga is a Zambian economist, who was governor of Zambia's central bank, Bank of Zambia from 2002 to 2011. 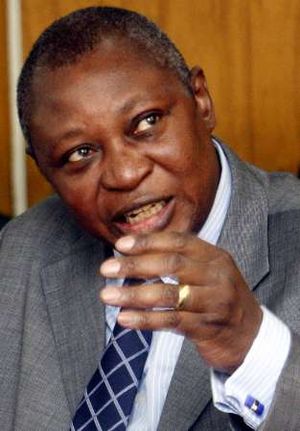 He was born in Mufulira, but the family later moved to Kabwe in Central Province. His parents were originally Nsofu in Mkushi district. His father was a trader and owned a small grocery, and his mother was a farmer. He first went to Mulungushi Primary School, then Imanza Primary School, which was a boarding school. In 1967 he entered Mumbwa Secondary School, a First National Development Plan school. He completed his secondary school 1971 and went the University of Zambia (UNZA) from 1972.

He is married to Rosario and has three children.

Dr Fundanga was appointed governor of the Bank of Zambia from March 2002 to 11 September 2011 by president Levy Mwanawasa after serving as Senior Advisor to the President of the African Development Bank in Abidjan, Cote D’Ivoire from 1998. He was succeeded by Michael Gondwe after the change of government with the coming in of president Michael Sata.

Dr Fundanga serves as President at the Institute for Finance and Economics.

Dr. Fundanga is currently Alternate Governor of the IMF Board of Governors. Further, he is a Member of the African Export and Import Bank Board and Executive Committee. He also serves as Board member and Vice Chairman of the Zambia Revenue Authority. He is currently the Chairman of the Junior Achievement Zambia Board and is also served as Chairperson of the Programmes Committee of the African Research Consortium. [1]