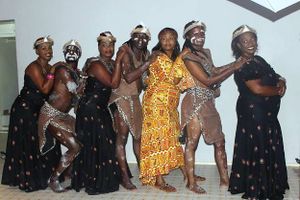 Amayenge Cultural Ensemble is a popular Zambian music group. Started by Chris Chali in 1978 in Choma, the band was originally called Crossbones, one of many Zambian acts that had spring up to do gigs based on Rock. Later the band became known as the New Crossbones, after a change in direction, sponsorship and amangement. The musical style of the group is called Kalindula, a distinctive Zambian popular style with traditional African roots. Chali died 30 May 2003, but the band has continued with Fraser Chilembo as their leader. Amayenge has received worldwide attention from WOMAD in London to Asia and the Americas. In the words of one author:

The band has continued to perform in Zambia and other southern African countries. Their membership has changed somewhat in recent years but news reports from the Times of Zambia, Zambian Post and Zambia Daily Mail routinely report their activities. A recent report is typical of news accounts of the band:

In 1996, Amayenge traveled to Whidbey Island, WA, where they met up with Moye Kashimbi, who had left Zambia to marry US citizen, Vernon Huffman, who became Tour Director for Amayenge. The band was enthusiastically received by audiences across the Pacific Northwest.

The band is also included on the following recordings: