Africa is the world's second-largest and second-most-populous continent. At about 30.3 million km² (11.7 million square miles) including adjacent islands, it covers 6% of Earth's total surface area and 20.4 % of its total land area.[2] With 1.2 billion people as of 2016, it accounts for about 16% of the world's human population. The continent is surrounded by the Mediterranean Sea to the north, both the Suez Canal and the Red Sea along the Sinai Peninsula to the northeast, the Indian Ocean to the southeast, and the Atlantic Ocean to the west. The continent includes Madagascar and various archipelagos. It contains 54 fully recognized sovereign states (countries), nine territories and two de facto independent states with limited or no recognition. 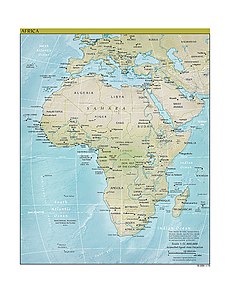 Africa's population is the youngest amongst all the continents;[3][4] the median age in 2012 was 19.7, when the worldwide median age was 30.4.[5] Algeria is Africa's largest country by area, and Nigeria by population. Africa, particularly central Eastern Africa, is widely accepted as the place of origin of humans and the Hominidae clade (great apes), as evidenced by the discovery of the earliest hominids and their ancestors, as well as later ones that have been dated to around seven million years ago, including Sahelanthropus tchadensis, Australopithecus africanus, A. afarensis, Homo erectus, Homo habilis and Homo ergaster – with the earliest Homo sapiens (modern human) found in Ethiopia being dated to circa 200,000 years ago.[6] Africa straddles the equator and encompasses numerous climate areas; it is the only continent to stretch from the northern temperate to southern temperate zones.[7]

Africa hosts a large diversity of ethnicities, cultures and languages. In the late 19th century European countries colonized most of Africa. Africa also varies greatly with regard to environments, economics, historical ties and government systems. However, most present states in Africa originate from a process of decolonization in the 20th century.

Satellite photo of Africa. The Sahara Desert in the north can be clearly seen.
A composite satellite image of Africa (centre) with North America (left) and Eurasia (right), to scale

Africa is the largest of the three great southward projections from the largest landmass of the Earth. Separated from Europe by the Mediterranean Sea, it is joined to Asia at its northeast extremity by the Isthmus of Suez (transected by the Suez Canal), 163 km (101 mi) wide.[8] (Geopolitically, Egypt's Sinai Peninsula east of the Suez Canal is often considered part of Africa, as well.)[9]

Africa's largest country is Algeria, and its smallest country is Seychelles, an archipelago off the east coast.[12] The smallest nation on the continental mainland is The Gambia.

Geologically, Africa includes the Arabian Peninsula; the Zagros Mountains of Iran and the Anatolian Plateau of Turkey mark where the African Plate collided with Eurasia. The Afrotropic ecozone and the Saharo-Arabian desert to its north unite the region biogeographically, and the Afro-Asiatic language family unites the north linguistically.

The climate of Africa ranges from tropical to subarctic on its highest peaks. Its northern half is primarily desert, or arid, while its central and southern areas contain both savanna plains and dense jungle (rainforest) regions. In between, there is a convergence, where vegetation patterns such as sahel and steppe dominate. Africa is the hottest continent on earth and 60% of the entire land surface consists of drylands and deserts.[13] The record for the highest-ever recorded temperature, in Libya in 1922 (58 °C (136 °F)), was discredited in 2013.[14][15]

Africa boasts perhaps the world's largest combination of density and "range of freedom" of wild animal populations and diversity, with wild populations of large carnivores (such as lions, hyenas, and cheetahs) and herbivores (such as buffalo, elephants, camels, and giraffes) ranging freely on primarily open non-private plains. It is also home to a variety of "jungle" animals including snakes and primates and aquatic life such as crocodiles and amphibians. In addition, Africa has the largest number of megafauna species, as it was least affected by the extinction of the Pleistocene megafauna.

Deforestation is affecting Africa at twice the world rate, according to the United Nations Environment Programme (UNEP).[16] According to the University of Pennsylvania African Studies Center, 31% of Africa's pasture lands and 19% of its forests and woodlands are classified as degraded, and Africa is losing over four million hectares of forest per year, which is twice the average deforestation rate for the rest of the world.[13] Some sources claim that approximately 90% of the original, virgin forests in West Africa have been destroyed.[17] Over 90% of Madagascar's original forests have been destroyed since the arrival of humans 2000 years ago.[18] About 65% of Africa's agricultural land suffers from soil degradation.[19]

Africans profess a wide variety of religious beliefs, and statistics on religious affiliation are difficult to come by since they are often a sensitive a topic for governments with mixed religious populations.[20][21] According to the World Book Encyclopedia, Islam is the largest religion in Africa, followed by Christianity. According to Encyclopedia Britannica, 45% of the population are Christians, 40% are Muslims, and 10% follow traditional religions. A small number of Africans are Hindu, Buddhist, Confucianist, Bahá'í Faith, or Jewish. There is also a minority of Africans who are irreligious.