Maiko Zulu (born Michael Somanje Zulu) is a Zambian musician,[1] human rights activist[2], politician and a recognized International Labour Organisation (ILO) Child Ambassador to Zambia. His work both in the music industry and human rights arena is well known both locally and internationally.[3]

Maiko was born in Livingstone which is a tourist capital city of Zambia. He grew up on his family owned farm. Maiko moved to Lusaka, the capital city of Zambia at the age of six.[4] It was while in Lusaka that Maiko began his singing career. Maiko often jumped the walls to watch local musicians perform. Later while in school, he toggled between being an amateur boxer, a drama actor and a budding songwriter.

Music, however, got the best of him and started traveling across the country performing with local music legends such as Ackim Simukonda, PK Chishala and Chris Chali of the Amayenge Cultural Ensemble. 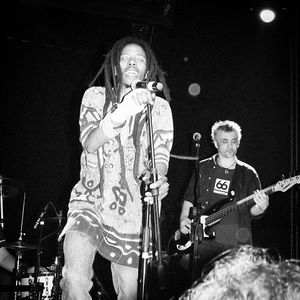 Maiko Zulu on stage in Lithuania

He entered the music industry with a stage name called "St. Michael", a name he later changed.[5] According to Times of Zambia newspaper interview with Zulu, he said that he changed his name "to maintain his African origin hence, adoption of the local spelling of Maiko".[6]

He has also performed with international musicians such as Brenda Fassie, Lucky Dube, Oliver Muthukudzi, Jabu Khanyile and Kanda Bongoman among others.

His songs include the controversial Mad President, which the state owned TV broadcaster banned from airing on their station.[7][8][9]

Maiko is credited for promoting human rights in Zambia. He received an award for this work from the International Labour Organization.[10] He speaks on behalf of the poor, especially children.[11] He is also an outspoken critic of politicians. He recently took part in a protest against the Zambian ruling political parts' continued harassment of Journalists.[12] He has also raised money and donated basic necessity goods to prisons[13]

Due to his involvement and active work in promotion of human rights, International Labour Organization (ILO) honoured him as goodwill Ambassador Against Child Labour for Zambia.

In 2001 he became the first Zambian artiste to be nominated for the Kora All Africa Music Awards [14]. He has won the local Ngoma Awards for Best Male Performer on two occasions[15] and also has an Annual Zambian Music Industry Awards in his collection. Maiko was also nominated for the M-Net Most talked about artiste awards in Zambia.