Christmas or Christmas Day (Old English: Crīstesmæsse, meaning " Christ's Mass") is an annual festival commemorating the birth of Jesus,[7][8] observed most commonly on December 25[4][9] as a religious and cultural celebration among billions of people around the world.[2][10][11] A feast central to the Christian liturgical year, it is prepared for by the season of Advent or the Nativity Fast and initiates the season of Christmastide, which historically in the West lasts twelve days and culminates on Twelfth Night;[12] in some traditions, Christmastide includes an Octave.[13] Christmas Day is a public holiday in many of the world's nations,[14][15][16] is celebrated culturally by a large number of non-Christian people,[1][17][18] and is an integral part of the holiday season, while some Christian groups reject the celebration. In several countries, celebrating Christmas Eve on December 24 has the main focus rather than December 25, with gift-giving and sharing a traditional meal with the family. 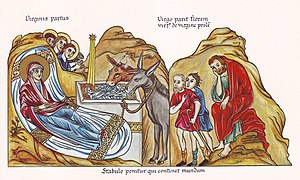 The Christian ecclesiastical calendar contains many remnants of pre-Christian festivals. Although the dating as December 25 predates pagan influence, the later development of Christmas as a festival includes elements of the Roman feast of the Saturnalia and the birthday of Mithra as described in the Roman cult of Mithraism.[19]

The Chronography of 354 AD contains early evidence of the celebration on December 25 of a Christian liturgical feast of the birth of Jesus. This was in Rome, while in Eastern Christianity the birth of Jesus was already celebrated in connection with the Epiphany on January 6.[20][21] The December 25 celebration was imported into the East later: in Antioch by John Chrysostom towards the end of the 4th century,[21] probably in 388, and in Alexandria only in the following century.[22] Even in the West, the January 6 celebration of the nativity of Jesus seems to have continued until after 380.[23] In 245, Origen of Alexandria, writing about Leviticus 12:1–8, commented that Scripture mentions only sinners as celebrating their birthdays, namely Pharaoh, who then had his chief baker hanged (Genesis 40:20–22), and Herod, who then had John the Baptist beheaded (Mark 6:21–27), and mentions saints as cursing the day of their birth, namely Jeremiah (Jeremiah 20:14–15) and Job (Job 3:1–16).[24] In 303, Arnobius ridiculed the idea of celebrating the birthdays of gods, a passage cited as evidence that Arnobius was unaware of any nativity celebration.[25] Since Christmas does not celebrate Christ's birth "as God" but "as man", this is not evidence against Christmas being a feast at this time.[8] The fact the Donatists of North Africa celebrated Christmas may indicate that the feast was established by the time that church was created in 311.[26][27]

Many popular customs associated with Christmas developed independently of the commemoration of Jesus' birth, with certain elements having origins in pre-Christian festivals that were celebrated around the winter solstice by pagan populations who were later converted to Christianity. These elements, including the Yule log from Yule and gift giving from Saturnalia,[28] became syncretized into Christmas over the centuries. The prevailing atmosphere of Christmas has also continually evolved since the holiday's inception, ranging from a sometimes raucous, drunken, carnival-like state in the Middle Ages,[29] to a tamer family-oriented and children-centered theme introduced in a 19th-century transformation.[30][31] Additionally, the celebration of Christmas was banned on more than one occasion within certain Protestant groups, such as the Puritans, due to concerns that it was too pagan or unbiblical.[32] The Seventh-day Adventist and also the Jehovas Witnesse reject Christmas celebration.

Mosaic of Jesus as Christo Sole (Christ the Sun) in Mausoleum M in the pre-fourth-century necropolis under St Peter's Basilica in Rome.[33]

Irenaeus (c. 130–202) viewed Christ's conception as March 25 in association with the Passion, with the nativity nine months after on December 25. Hippolytus of Rome (170–235) may also have identified December 25 for the birth of Jesus and March 25 for the conception.[8][34] Sextus Julius Africanus (c. 160–c. 240) identified December 25, later to become the most widely accepted date of celebration, as the date of Jesus' birth in 221.[35] The precise origin of assigning December 25 to the birth of Jesus is unclear.[35] Various dates were speculated: May 20, April 18 or 19, March 25, January 2, November 17 or 20.[8][36] When celebration on a particular date began, January 6 prevailed at least in the East;[37] but, except among Armenians (the Armenian Apostolic Church and the Armenian Evangelical Church), who continue to celebrate the birth on January 6, December 25 eventually won acceptance everywhere.[36]

The New Testament Gospel of Luke may indirectly give the date as December for the birth of Jesus, with the sixth month of Elizabeth's pregnancy with John the Baptist cited by John Chrysostom (c. 386) as a date for the Annunciation.[8][38][39] Tertullian (d. 220) did not mention Christmas as a major feast day in the Church of Roman Africa.[8] In Chronographai, a reference work published in 221, Sextus Julius Africanus suggested that Jesus was conceived on the spring equinox.[40][41] The equinox was March 25 on the Roman calendar, so this implied a birth in December.[42]

The belief that God came into the world in the form of man to atone for the sins of humanity, rather than the exact birth date, is considered to be the primary purpose in celebrating Christmas.[43][44][45]

In the early 4th century, the church calendar in Rome contained Christmas on December 25 and other holidays placed on solar dates. According to Hijmans[46] "It is cosmic symbolism ... which inspired the Church leadership in Rome to elect the southern solstice, December 25, as the birthday of Christ, and the northern solstice as that of John the Baptist, supplemented by the equinoxes as their respective dates of conception." Usener[47] and othersproposed that the Christians chose this day because it was the Roman feast celebrating the birthday of Sol Invictus. Modern scholar S. E. Hijmans, however, states that "While they were aware that pagans called this day the 'birthday' of Sol Invictus, this did not concern them and it did not play any role in their choice of date for Christmas."[46]

Around the year 386 John Chrysostom delivered a sermon in Antioch in favour of adopting December 25 celebration also in the East, since, he said, the conception of Jesus (Luke 1:26) had been announced during the sixth month of Elisabeth's pregnancy with John the Baptist (Luke 1:10–13), which he dated from the duties Zacharias performed on the Day of Atonement during the seventh month of the Hebrew calendar Ethanim or Tishri (Leviticus 16:29, 1 Kings 8:2) which falls from late September to early October.[8] That shepherds watched the flocks by night in the fields in the winter time is supported by the phrase "frost by night" in Genesis 31:38–40. A special group known as the shepherds of Migdal Eder (Genesis 35:19–21, Micah 4:8) watched the flocks by night year round pastured for Temple Sacrifice near Bethlehem.[38][48]

In the early 18th century, some scholars proposed alternative explanations. Isaac Newton argued that the date of Christmas, celebrating the birth of him whom Christians consider to be the "Sun of righteousness" prophesied in Malachi 4:2,was selected to correspond with the southern solstice, which the Romans called bruma, celebrated on December 25.[49] In 1743, German Protestant Paul Ernst Jablonski argued Christmas was placed on December 25 to correspond with the Roman solar holiday Dies Natalis Solis Invicti and was therefore a "paganization" that debased the true church. It has been argued that, on the contrary, the Emperor Aurelian, who in 274 instituted the holiday of the Dies Natalis Solis Invicti, did so partly as an attempt to give a pagan significance to a date already important for Christians in Rome. In 1889, Louis Duchesne proposed that the date of Christmas was calculated as nine months after the Annunciation, the traditional date of the conception of Jesus.[50]